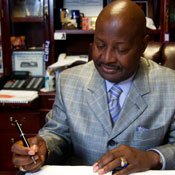 With budget concerns in mind, the Hinds County Board of Supervisors denied pay raises requested by county Tax Collector Eddie Fair in a meeting this morning, while approving the hiring of another county position.

Fair brought a request to raise the salaries of four employees in his office by between $100 and $200 a month. Fair told the Jackson Free Press that he assigned the employees dual duties after his office lost six positions in a round of county-wide layoffs in September. "My attempt was to reward people doing dual jobs," Fair said.

Supervisors declined to consider Fair's request, though, and instead granted him a request to replace another employee who resigned in December. Fair said that he understood the board's rationale for denying the pay raises.

"This (is) a time that the economy (is) bad, and it wouldn't look good to increase people's salary when we've just laid people off," Fair said.

The board voted unanimously to approve a pay raise for an assistant county attorney, Edward Watson. The county attorney's budget already accounted for Watson's raise, which accompanied his transition from a probationary status, County Attorney Sherri Flowers said.

"The money is in my budget," Flowers said.

The board also approved the hiring of a new director of human and capital development. The previous director, Lisa Lucas, resigned March 12, and Supervisor Doug Anderson offered a motion to hire a replacement, although the issue was not on the meeting agenda.

"We need to have a person who will work for the county on the county's time," Anderson said.

Anderson's motion passed, with Fisher and Supervisor Peggy Calhoun voting against the measure. Calhoun said that the county's poor performance in securing grants gave her pause.

"We have been paying an awful lot to a person, and the grants have not been coming in," Calhoun said. "We just need to look at restructuring and re-evaluating."

Calhoun told the Jackson Free Press after the meeting that the county's human and capital development office has only monitored existing grants in the county and has not brought any new grants to the board. Instead, individual county departments have taken on the task of acquiring grant money, she said.

Fisher also sought to cancel the county's contract with Airwaves LLC, the telecommunications company responsible for maintaining the county's emergency sirens. Fisher pointed to a March report on tests of the county's sirens, which revealed that 17 of 57 sirens monitored in the report were not functioning.

"What we are doing now is failing," Fisher said. "I was frankly stunned to find these numbers."

The county pays Airwaves $36,500 per quarter to maintain the sirens, a cost that Fisher called "an outrageous sum of money." Fisher's motion died for lack of a second.

Board President Robert Graham, who has pushed for the county's purchase of new sirens, argued that the numbers from the March report, while unacceptable, were better than those when the county Emergency Operations Center maintained the sirens. There were times when nearly 50 sirens in the county were non-functional.

"It was much worse than that before Airwaves started to repair the sirens," Graham said. Maintenance problems with sirens are unpredictable, he noted: "One of the problems that I've noticed is that we could have 16 (sirens) out today, and next month it could be 18."