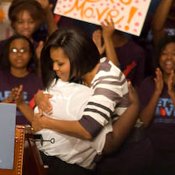 Obama spent the last stop on her "Let's Move" campaign in Jackson today to promote health and exercise to combat national obesity.

The Jackson Police Department is conducting an internal investigation of one of its officers for "conduct unbecoming of an officer" during First Lady Michelle Obama's visit last week, according to a department statement released yesterday.

The officer has been reassigned, a JPD press release stated yesterday. JPD has not released the officer's name, but WLBT identifies him as Chris Barnhart and reports that the department has transferred him to its animal control division.

Barnhart made "derogatory statements" about the First Lady via his cell phone, according to WLBT.

Not only that, but a.) were the comments made on his personal cell phone or a city-issue phone and b.) who was within earshot to hear it and report it?

He put his comments on FACEBOOK. This is the kind of disrespect and disregard I blogged about with the Mayor's involvement in the First Lady's trip to MS. To think that a person who is responsible for protecting her would have those degrading negative thoughts is beyond me. He had the nerve to call her ignorant. I would like to see his resume. I know that there are issues here of "Freedom of Speech"; however,there are just some people that some others don't need in their fox hole.

Where did you get that information, justjess? The WLBT report says he texted his remarks. Facebook is only mentioned to point out that he's a member of some anti-Obama Facebook group.

I am *shocked* that a Jackson police officer would do this! You would think he would have more sense...especially since we have such high standards for hiring police officers. Don't we require them to have a college degree in law enforcement or criminology? And don't we pay them at least $60k a year? It's not like we're just giving a gun and a badge to any idiot who needs a job!

She might not be ignorant,but being well educated dosen't mean she's intelligent. Just because she went to Princeton and Harvard dosen't mean a thing, I'm not impressed, just she means she went to high priced schools. There's lots people in the world with the same education backgrounds that are dumber than doorknobs. George W went to Yale and Harvard, but he isn't the brighest bulb in the pack, now is he?

BubbaT why are you always defending bigotry. I have to say you are the only one that comes on jfp constantly and always have to be the negative one. I think you would fit better over at the CL.

NewJack- what bigotry was I defending?

It really doesn't matter how educated, uneducated or miseducated the First Lady might be. As an employee of the the city hosting the First Lady, he should have had more tact. Unfortunately, the emergence of social media and social networks has caused us all to forget how to filter a little...

Get Bubba, NewJack. We're watching and on your side!

Now I'm not saying that the First Lady is ignorant, but just because someone went to prestigious institution doesn't necessarily make them all knowing. A case in point would be the film maker who was profiled in the article "Eyes Wide Shut" on this site. A rather extreme example but it illustrates how an educated person can at the same time be ignorant to the things around them. As we all can. Free speech issues aside which is the officer's right. He shouldn't be texting while he is on duty charged with the First Lady's protection. Leaving our city and our police department open to the same old kind of bad press we seem to always get. Does the word professionalism not mean anything to this guy? That alone, for me, is grounds for demotion to dog doody...err duty. While I hate to jump to conclusions about bigotry I'm pretty sure he wasn't texting criticism of her choice of shoes with the dress she was wearing.

Walt- LOL Do you really think I care what NewJack thinks? NewJack not even being able to read a map 2yrs ago in Civil Rights Museum thread and see Tougaloo College was in Madison County and the Jackson City limits both still amuses me,I still shake my head and chuckle everytime I read his name, since then I hardly even pay attention to anything he post.

I know bubbaT that every issue has a left and a right viewpoint, so i guess your JFP's far right opinion on everything. Thanks for making us Fair and Balanced.

Being in charge of one of the largest hospital systems in the Chicago area doesn't exactly make one the dumbest person on Earth either. I think Mrs. Obama is very intelligent. Not only that, but she pulled herself by her bootstraps and made something out of herself. In other words, she took personal responsibility (Republican code words) to be something better.

NewJack, shouldn't you embrace the diversity of BubbaT's opposing viewpoints, instead of asking him to leave the JFP and head to the CL. Doesn't sound very inclusive (democrat code words) to me.

INTELLIGENCE: Just from a simplistic point of view, the word means one's ability to learn, to understand or to deal with new and trying situations. It is evidenced through one's ability to apply knowledge to manipulate their environment. Isn't this what the First Lady is doing as she attempts to deal with OBESITY - a National problem with our state leading the pack?? Didn't she speak to the need for eating nutritiously and exercising?? She didn't land in Jackson dressed in academic regalia and flaunting the fact that she is a Princeton grad and former tenured law professor at Harvard University. What else can she do to prove that she is not an ugly, ignorant monkey? Must people of color always be given the Jackie Robinson treatment? The only unintelligeble act that Mrs. Obama committed was coming to MS - a state that continues it problem of far too many judges using color or skin rather than "contex of character." The only understaning I have of this is something my GM said, "It is better to ramain silent and be thought a fool than to............"

Doesn't surprise me. I'm surprised it took so long for the comments to surface, and that there are not more! I'm sure most well-mannered hospitable Jacksonian white people made sure to look around to make sure there were no African-Americans around, put their hands over their mouth, and spoke lowly but assertively when talking about Obama, just like they always do, but then smiled when she walked by. If Michelle Obama doesn't impress BubbaT, what does? Probably any woman under 300 pounds with all her teeth with less than 7 bastard children. Screw those Ivy-league know-it-alls!

One awesome thing about the Obamas that nobody comments on is that they are excellent bigot magnets. Wherever they go and whatever they do, the bigots come out of the woodwork to say something offensive about them, and lose their jobs in the process. They need to do a red state tour to pull the cancer out.

DrumminD- actually I more impressed with a woman who has reddish blond hair,120lbish,got all her teeth,and a mother of 2 fine girls,very intelligent and strong willed. Been married to her for 25yrs. But there's nothing wrong with a 300lb toothless woman with 7 kids, they deserve respect too, they are people too and their apperance has nothing to do with their intelligence. It's really sad you would disrepect them trying to insult me.

You know ButtaT the description you gave of your wife fits that of The First Lady, Mrs. Michelle Obama. She weighs around 120/130, has beautiful hair, has all of her teeth, is a mother of two fine girls, and she is very intelligent and strong willed. They haven't been married quite as long as you but all signs point to the fact that they are on their way. My what similarity: I guess you can say that you and President Obama have excellent taste!!

I guess BubbaT really does support Obama after all. We appreciate your support for the cause BubbaT.

Drummin- LOL Me? Support Obama? LOL Wrong. Never. I take that back, if he came up with idea or policy I could support, I probably would on that issue, but so far he hasn't so I don't, but I really don't have high hopes he will.

Y'all leave Bubba alone. It takes time to comprehend and accept the exodous of Barry Steve and Michelle from the field to the White House or Board Room. I mean we (Black folks) got to see something we thought we would never see, and Bubba and the republicans got to see something they didn't ever want to see, a Black President and Black First Lady. Officer Throwback wasn't ready either. Where is your empathy for Bubba? I understand, Bubba, and you're still my dog! Besides Bubba is the only remaining far right republican left over here at the ass-kicking JFP. Let's not run him off too.

I have no problem running off Republicans. I'm not bipartisan like Obama. I wouldn't want to run off BubbaT though, as he is a staunch Obama supporter. Everyone say after me, from now on, BubbaT loves Obama and his policies. We thank him for his service.