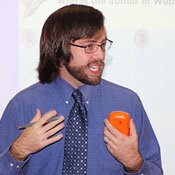 Jackson Public Schools District named David Fuller the district's Teacher of the Year last week for his use of technology in the classroom.

Fuller says he was in "complete and total shock" as faculty members presented him with more than $1,000 in gifts from donors.

Forest Hill principle Dr. Debra Mays-Jackson recommended Fuller for award, citing his innovative use of technology in the classroom. Fuller, who worked for several Web-development companies prior to becoming a teacher in 2008, uses video to teach his students--even when he can't be in the classroom.

He also adapts literature so his students can relate to it better. Recently, while teaching a lesson on the novel "Wuthering Heights" by Emily Bronte, he allowed his students to create a Facebook page for the characters.
"It was a way for them to imagine what a wall conversation would be like between Catherine and Heathcliff," he says. "It's important to engage students, and the classroom is a great place to explore."

Fuller says he switched out of the technology field to find a more fulfilling career, and credits his wife, Janet--an English as a second language teacher for the Madison County School District--for inspiring him.
"I was watching her work and saw the impact she had on her students," he says.

In addition to AP literature, Fuller teaches British literature at Forest. He received his bachelor's degree in English from Mississippi College. He also has a master's degree in theological studies from Texas Christian University.

Outside of his classroom, Fuller is an active member of the Mississippi Scholastic Chess Association and currently serves as the board secretary. He also helped start the school's chess, drama and literary clubs.