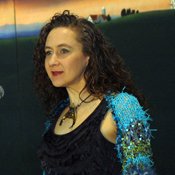 Heather Henson, daughter of Jim Henson, will host an interactive screening of "Labyrinth" tonight at the Mississippi Museum of Art.

When Heather Henson was a young girl, she would spend her time creating art projects inspired by her father Jim Henson's magical creatures and movie sets.

Henson, 40, is the youngest of Jim and Jane Henson's children and is also a puppeteer. Her own company, IBEX Puppetry, produces independent puppet films, puppet festivals and puppet shows that focus on the environment.

"I'm not exactly following in my dad's footsteps, but it's puppetry," Henson told the Jackson Free Press. "There are a lot of interests that are similar. I like live puppetry and the creative process."

Henson is in town this weekend for a series of events at the Jim Henson exhibit at the Mississippi Museum of Art. Tonight she is hosting an interactive viewing of her father's film "Labyrinth."

Labyrinth Is a coming of age story about a young girl, Sarah who faces her fears and finds her inner strength through fantasy and adventure.

Henson says the interactive showing of Labyrinth is like "a Rocky Horror Picture Show for children," and requests that people dress up for the film. During the screening, she will pass out bags to audience members containing props "so that they can journey into the labyrinth with us," Henson says.

"Labyrinth" is a very special film to Henson, and watching it reminds her of her childhood.

"My dad was often bringing us onto the set," Henson recalls. "I got to go to the 'Labyrinth' set almost every day of the filming process. When I watch it, it's almost like watching home movies."
Henson graduated from the Rhode Island School of Design and currently lives in Orlando, Fla.

The "Labyrinth" interactive viewing is today at the Mississippi Museum of Art Trustmark Grand Hall at 6 p.m. Admission is $5 for museum members and $7 for non-members. On Saturday, the museum will host a Muppet Movie sing-along at 2 p.m.