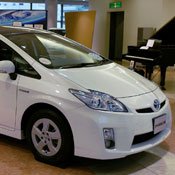 In 2007—before the economy tanked—Mississippi lawmakers and Gov. Haley Barbour approved a $293.9 million incentive package to persuade Toyota Motor Corp. to build a factory in Blue Springs, Miss., near Tupelo. Proposed improvements to the 1,700-acre site plan include infrastructure upgrades to water and sewer lines, and new roads. Toyota set an opening date for 2010, but stopped building in 2008, citing the poor economy.

Still, with the promise of 1,500 eventual new jobs and economic growth, the plant has support from public officials and citizens even in the face of recent vehicle recalls. Last week, company executives apologized for its handling of safety flaws to the U.S. House Committee on Oversight and Government Reform. In November 2009, the company issued a recall to address a malfunction that could cause gas pedals to stick. The company issued a second recall in early February for sudden acceleration in its Prius hybrid models, the same vehicle to be manufactured at the Blue Springs plant.

Despite these setbacks, Toyota maintains that the recalls will not stop the Mississippi plant, but that it will wait until demand for production increases. Even when the company does announce an opening date, it could take anywhere from 18 to 24 months for the plant to start production and employ a full work force.

Barbour, Kentucky Gov. Stephen Beshear, Indiana Gov. Mitch Daniels and Alabama Gov. Bob Riley wrote to the House Energy and Commerce members Feb. 10, defending the company that has or plans to have plants in all their states. The letter blamed the public's negative reaction to the company's safety issues on unfair media coverage. The letter also states that the government has a conflict of interest because of its stake in Toyota's competitors.

"It is unfortunate and unfair that Toyota has fallen victim to aggressive and questionable news coverage of these issues when the real story is how quickly Toyota identified the problems, found solutions and delivered those solutions to its dealers worldwide," the letter states.

Under questioning from the House Committee on Oversight and Government Reform, however, U.S. Toyota executive Yoshimi Inaba admitted last week that Toyota was aware of issues with sticking pedals in Europe for a year before accidents occurred in the United States.

Last week, the Mississippi House approved $300 million in bonds for infrastructure improvements in the state, including $42 million for a new highway from Pontotoc to Sherman, near the future Toyota plant.

Steve Holland, D-Plantersville, voted in favor of the improvements, saying the road was needed regardless.

"That road needs to happen to matter what," he said. "It will connect (Highway) 78 to 76, and that's just 10 miles that will connect Toyota and the rest of the industry in our state to that four-lane, and go on into Jackson, New Orleans and the ports."

House Appropriations Committee Chairman Johnny Stringer, D-Montrose, has concerns about the future of the plant. In January he compared the Toyota Plant to the failed Yalobusha County Mississippi Beef Processors LLC plant, which closed in August 2004 after three months in operation, losing taxpayers about $50 million.

"We've issued over $200 million worth of bonds, and we have 80 jobs. Some of them are security jobs," Stringer said. "I'm afraid with the problems Toyota has right now, it's going to be a few years before they open."

Stringer maintains that with the current shortfalls in revenue, the state's money could be better spent.

"It's a lot of money. Here we are looking at laying teachers off and state employees," he said. "We are trying to cut back at every angle, and we have a $200 million investment and no jobs. It's just hard to swallow right now."

Stringer said that money the state has spent could have gone as tax incentives to existing Mississippi companies that are already employing people.

State Treasurer Tate Reeves maintains that the contract with Toyota ensures that the state will not lose money in the endeavor and will repay the state for what has already spent to date, which the Mississippi Development Authority says is currently about $180 million.