Where are They Now? | Jackson Free Press | Jackson, MS

Where are They Now? 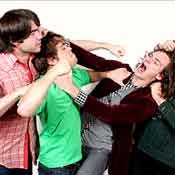 When musicians leave Jackson to follow their path to new opportunities and sucess, they leave behind a local fan base. Want to know what they're up to now? Here's what.

Tyler Tadlock
Jackson native Tyler Tadlock moved to Portland, Ore., in 2008 to cure his wanderlust. On June 22, he released "Spirituals," an electronic-based project that combines jazz compositions and electronic music creating intense rhythms and beats. Local musician Johnny Bertram collaborated with Tadlock on the album. Tadlock is also a graphic artist and designed the cover art for his CD.

"There are a lot of similarities between Jackson and Portland," Tadlock says. "In Portland, there is a lot more going on and a lot more venues, but I felt like anytime something goes on in Jackson there is always a huge interest. It's a real tight-knit community."

Tadlock says he doesn't have any set dates to perform in Jackson but will play again the next time he is in town visiting family. "Spirituals" is available on iTunes.

Chris Wheeler
Chris Wheeler, a Pensacola, Fla., native, moved to Jackson in 2005. As a guitarist, he played with several musicians, but he's better known for playing with AJC & The Envelope Pushers. Six months ago, he moved to Nashville, Tenn., and is now pursuing music fulltime with the indie-pop band, The Gills. Wheeler's younger brother Jesse is the band's lead singer.

"Nashville has a very healthy indie rock scene," Wheeler says. "Its just now getting bigger and better. The Jackson music scene is comparable—Nashville is just a bigger city."

eZra Brown
Saxophonist eZra Brown is never far from his instrument. A Native of South Carolina, the musician has played for more than 15 years. Not one to be boxed in, he's performed with gospel, jazz, hip-hop and rock artists professionally. Two years ago, he relocated from Jackson to New York City to further pursue his career. Since his move, he has toured internationally and recorded videos for MTV. He is currently booking a European tour, where he will play with former Fugees member John Forte. Brown is also featured on the song "Breathe," which he recorded with Blitz the Ambassador, on the World Cup soundtrack.

"My plan was to spread my art so people can hear Mississippi soul worldwide," he says.

The musician says he moved to Dallas to open a new chapter in his life.

"It's a larger scale, but it's just a change in an environment," he says. "Wherever I go, I want people to know where I'm from," 7even:Thirty says.

He plans to schedule performances in Jackson soon. For more information, visit http://www.myspace.com/7eventhirtysounds.

After playing in Living Better Electrically for seven years, Jakob (a former JFP designer) says he was feeling musically burned out and needed to recharge, which spurred his move to Austin. Last year, Jakob and Joshua both became fathers and temporarily put their music careers on hold. Now the brothers have a new band, Model Plains.

In July, Model Plains will begin recording with Jackson musicians Len Clark and Misha Hercules. Jakob says they will start booking shows when the band is
finished recording.

"People tend to come out and see music a lot more (in Austin)," he says. "There is a bigger audience and people are generally more excited to hear bands than to
drink beer."