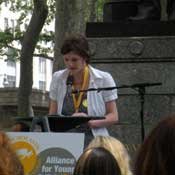 When she was 8 years old, Alexandra Franklin's mother tried to separate her from her love of reading. After Franklin's math grade started to slip, her mother came into her bedroom, trash bag in tow, and began to pack up her books.

"I was crying ... but like any good junkie, I had books stashed under my mattress and in my closet," she says.

Eventually, she got her books back.

Franklin, 18, taught herself to read when she was 3, and has had a love for books ever since. After reading every book in her house, she asked her father to take her to the bookstore one Sunday afternoon. In order to get out of taking her, he advised her to start writing her own books. This was the beginning of her writing career.

"It's a part of me and it's always been there," she says.

In March Franklin, a Jackson native and a recent graduate of Jackson Preparatory School, won the national 2010 Scholastic Art and Writing Award for her writing portfolio in the general writing category, and she received a gold medal. The Eudora Welty Foundation selected Franklin's portfolio as the regional winner and entered her into the national competition.

"The people at the Eudora Welty Foundation have been so great at encouraging and supporting me as well as young writers from all over Mississippi," she says "...I think Eudora Welty would be proud of what the foundation is doing."

As a recipient of this coveted award, Franklin, along with 15 graduating seniors from across the country, received a $10,000 scholarship and traveled to New York City for the awards ceremony at Carnegie Hall on June 9. The teens also appeared on Good Morning America.

"Standing on the stage at Carnegie Hall feels just like a dream," she says.

Actress Elizabeth Marvel read Franklin's work at the ceremony. Franklin says she loved hearing the interpretation of her writing and it meant a lot to have her work honored. She also met with representatives at Harper Collins Publishing while in New York.

Franklin says she was more nervous about getting up on stage for her high school graduation than she was in New York. She says she looks forward to continuing to grow as a writer and will enter the Honors College at the University of Alabama to major in English this fall.

Keep up the good work!