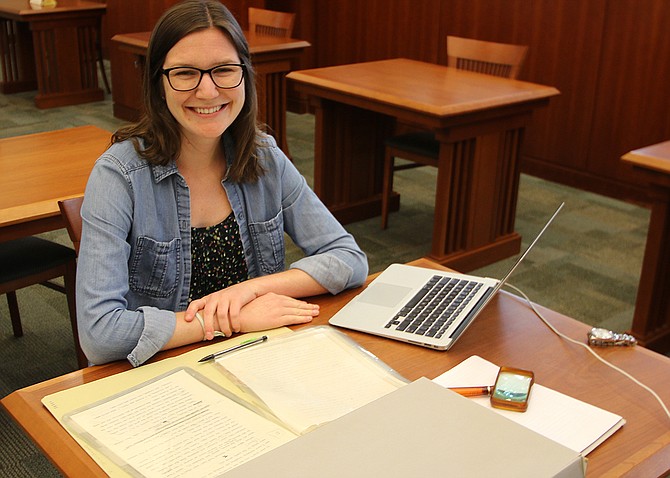 For Leonard's research, she is using MDAH's collection of Welty's short fiction published in the New Yorker to better understand how Welty's work with the magazine shaped views of the South for people living elsewhere at the midcentury.

"The goal of my research is to understand what the implications of Welty's writing were on the pages of the New Yorker, which people from more cosmopolitan areas outside the South read and which informed them (of) what the South was like," Leonard says. "The New Yorker was one of the most socially influential magazines in the U.S. (at the midcentury), and I'm looking at how Welty's work shaped people's expectations of the South and even served to work against them."

Recipients can use the fellowship grant for travel, housing and other expenses during their two-week-minimum stay in Jackson to research at MDAH's Eudora Welty collection, which includes manuscripts, letters, photographs, drawings, essays, and film and video footage that span Welty's entire life. Leonard stayed in Jackson to use the archives from June 12 to June 29.

Some of Welty's publications that Leonard is using in her research include "Kin," "No Place for You, My Love," "Bride of the Innisfallen" and "The Ponder Heart," as well as short-fiction manuscripts from around the same time that did not appear in the New Yorker. Leonard is also studying Welty's unpublished correspondence with New Yorker editors, such as William Shawn, and her agent, Diarmuid Russell.

"I became interested in this project when I found out that a lot of my favorite authors, such as Truman Capote, Elizabeth Spencer and Carson McCullers, had a connection with the New Yorker, having contributed or published (or worked for) the magazine," Leonard says.

"When I looked at the works of published authors from the South in the magazine, I found that Miss Welty's were the most evocative and interesting to me. She wrote a lot about the importance of place in fiction and was vocal about understanding a text by approaching it from the role of place within the story. The metaphors and images she used to describe the setting of her stories were ... meaningful, and I want to show how she made places in the South come alive for people with her words and language."