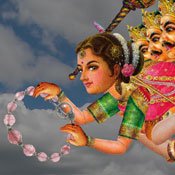 "Sita Sings the Blues" is a diaphanous dream of an animated musical. The movie opens on the voluptuous and glittery goddess Sita rising from salty blue waves on a pink lotus blossom. On another lotus blossom, a peacock Victrola balanced on a cobra table plays a scratchy torch song. Sita placidly sways to the jazzy rhythm until the record gets stuck on "a woman like me." Then, with a burst into a cosmic universe, a beating heart centers a kaleidoscopic montage of floating deities. This is big. It's the greatest break-up ever.

The film, written, directed, edited, animated and produced by Nina Paley, tells two parallel stories of heartbreak punctuated by the 1920s jazz songs of torch singer Annette Hanshaw. One story is ancient and epic and based loosely on the Hindu "Ramayana." The other is contemporary and biographical, based on Paley's divorce. The stories are universal, timeless and told in a fresh, original style, marrying Eastern and Western philosophy and art.

As narrated by shadow puppets with heavy Indian accents (Aseem Chhabra, Bhavana Nagulapally and Manish Acharya), the goddess Sita is the virtuous wife of the god Rama. Despite her heavenly beauty, purity of heart and unconditional love for her husband, Sita's marriage to Rama is not bliss. After Rama is banished from the kingdom for 14 years, the demon king Ravana kidnaps Sita. Ravana covets Sita's fair-as-lotus-blossom skin, her eyes like lotus pools, her hands like lotuses and her big, round, firm ... lotuses. Rama raises an army and rescues Sita, but he has nagging doubts about her chastity.

"Am I blue, am I blue, Ain't these tears in these eyes telling you," sings Sita (sung by Hanshaw). She croons her sad songs for all broken-hearted women.

Nina (voiced by Paley) feels exactly like Sita. She cries "weak American tears" (a phrase coined by playwright John Howell) when her husband, Dave, goes to India for six months of work. When Dave signs on for another year, Nina places the cat up for adoption, sells the condo in San Francisco and travels to India to join her husband.

"Was a time I was his only, only, only one. But now I'm the sad and lonely one," she sings.

The intercutting of Sita's epic tale with Nina's personal failures pops the hot air from the fairy-tale bubble of happily ever after and replaces it with the simple truth: Unconditional love may not be enough to sustain a marriage.

"That man went away. Now he's gone, and we're through. Am I blue," Sita sings.

Paley's film, which won awards at the Berlin International and countless other film festivals, was her way of coping with her own personal tragedy.

"I'm just an ordinary human who also can't make her marriage work," Paley writes on the movie's website. "And the way that it fails is uncannily similar to the way Rama and Sita's (relationship fails): Inexplicable yet so familiar. And the question that I asked and the question people still ask is, ‘Why'? ‘Why did Rama reject Sita?' ‘Why did my husband reject me?' We don't know why, and we didn't know 3,000 years ago."

Paley's visualization of the intertwined stories is a brilliant collage of jeweled colors and ingenuity. With one exception, she animated the entire film. She used old-fashioned, low budget 2-D techniques and Flash animation. The result is a Bollywood extravaganza, swirled with surrealism and topped with wide-eyed "Betty Boopness."

The film is sheer enchantment.

"Sita Sings the Blues" is part of the "Dinner and a Movie" series at Rainbow Whole Foods Co-Operative Grocery (2807 Old Canton Road), screening June 4 at 7:30 p.m. A vegetarian Indian dinner precedes the screening of the film. Advance tickets, available at Rainbow, are $13 for non-members and $11 for members. Tickets at the door are $16 for non-members and $14 for members. For more information, call 601-366-1602.

Rainbow Whole Foods Co-Operative will screen"Sita Sings the Blues" at 7:30 p.m. during "Dinner and a Movie" on June 4. A vegetarian Indian dinner will precede the screening.