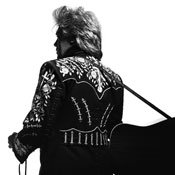 Marty Stuart, a Philadelphia, Miss., native, is firmly rooted in traditional country music with a mission of preserving that history. Stuart is a self-proclaimed bridge, connecting young musicians with their history while promoting the musical heritage of his home state.

Stuart has just finished recording a traditional country-music album, "Ghost Train: The Studio B Sessions" in Nashville's legendary RCA Studio B, where he played mandolin in Lester Flatt's band when he was just 13. Stuart is seeing his almost 40-year career come full circle. In addition to helping his Nashville neighbors recover from the recent floods, Stuart is busy preserving country-music memorabilia and presenting it to audiences nationwide.

Stuart's collection, "Sparkle and Twang: Marty Stuart's Musical Odyssey," opened in Meridian at the Riley Center July 10 and will remain through Sept. 18.

The musician took a few minutes to speak with the Jackson Free Press about his latest projects via telephone.

Tell me about how "Sparkle and Twang" came together. What are some of your favorite pieces in the collection?
It's ... the largest private collection of country music treasures in the world. ... Johnny Cash's first black suit he performed in, the boots Patsy Cline was wearing when she lost her life, the original handwritten manuscripts that Hank Williams wrote in pencil to "Your Cheatin' Heart" and "I Saw the Light." ... that's what's on display.

On the day of the concert, the state will erect a Mississippi Country Music Trail marker in your honor in Philadelphia. How did the marker come about?
I noticed, as an insider and an outsider to the state, how much publicity and how much the Blues Trail did for Mississippi. It had a lot of impact ... so it was an idea that came into being, and we unveiled the first (marker) two or three weeks ago in Meridian at Mr. (Jimmie) Rodgers' grave. And Philadelphia being the second stop, it's profoundly significant to me to have a historical marker on the town square in Philadelphia in front of the place where I got my first guitar.

Your new album, "Ghost Train," is due out Aug. 24. Tell me about it.
I wanted to write a traditional country music record--authentic, hard-core. Not retro, but I'm talking authentic and go back to that setting and make a record. ... The first song written for this was called "Hangman" that I wrote with Johnny Cash four days before he passed away, and that was the beginning of this record. I thought, "This has got to be a deep and profound kind of record, so I want to take my time with it."

In the history of country music, how would you like to be remembered?
Oh my God, it's a work in progress. If I have to draw a line on it today, back at the beginning of the decade I decided I'd had plenty of hits, and I wasn't really quite happy with the way the legacy was setting up. So I went deep, and I went back down into the woods of Mississippi and went back to my family farm and just took some time and did some soul-searching. When I came out, what I saw was there's a world beyond the chart, and that's the heart and looking around at what needs help. Well, what needed help, in my opinion, was the state of Mississippi and unifying all the musical and creative entities--getting ourselves unified and then driving the musical legacy of our state back to the world to re-offer it again. ... I'm not a slave to the chart anymore. This has been the most creative decade of my life. It's almost 40 years, and I'm free, and it's wonderful to use that guitar and that mandolin and that pen and my band and everything that I have at my disposal to do something good with. I love it.

The "Sparkle and Twang" exhibit is on display at the MSU Riley Center for Education and Performing Arts (2200 5th St., Meridian). Tickets are $10 for adults and $5 for students (through college). The exhibit is open 10 a.m.- 4 p.m. Tuesday through Friday and noon-4 p.m. Saturday. http://www.msurileycenter.com.

Marty Stuart Factiods
•Born Sept. 30, 1958 in Philadelphia, Miss.
•Got his first guitar when he was 2 years old
•Started his first band when he was 10 years old
•Married Johnny Cash's daughter, Cindy,
in 1983; divorced five years later
•In 1970, at 12 years-old, attended a Connie Smith concert at the Choctaw Indian Reservation. Stuart and Smith were married in 1997, 27 years after that first meeting.