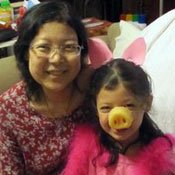 When her colleagues needed a creative solution for an exhibit or a workshop, Mississippi Museum of Art curator Lianne Takemori would go out of her way to help no matter how busy she was.

Amanda Cashman, who conducts student tours and teaches classes at museum, says Takemori mentored her. "Lianne was incredible with giving me great ideas on projects and activities to do with the kids," Cashman says. "Any time I got stuck for an idea ... I could go to her. Once she started coming up with ideas, and started shooting them off you, it was like watching (fireworks). "

Takemori, who was the museum's curator of education and studio programs for more than 10 years, passed away July 6, after battling ovarian cancer. She was 40 years old.

Takemori was born in Honolulu, Hawaii, and moved to Jackson in the early '90s to attend Mississippi College where she earned an art degree in 1995. She worked as an art teacher for the Clinton Public School District for a year, and then worked as a historian at the Old Capitol Museum prior to her position at the art museum.
In 2007, she wrote the children's book "The Four Dog Blues Band or How Chester, Boy, Dog in the Fog and Diva Took the Big City by Storm," which the National Book Festival in Washington, D.C., featured in 2008. The book also won several national awards.

When Takemori began to lose her battle with cancer a few weeks ago, her husband, James Renfroe, says she joked that she wanted her family and friends to remember her by getting together and singing karaoke. A few hours before her death, however, she requested that her love for arts education and her 8-year-old daughter Ivy be a part of her life's celebration. Last Saturday, staff members and family honored Takemori during a memorial service at the art museum.

Renfroe also worked with the museum to set up the Lianne Takemori Fund for Professional Education to provide opportunities for professional development for art teachers and educators.

Renfroe says his wife was one of a kind.

"I never heard my wife say ill things about anyone," he says. "She loved everybody and tried to be a best friend to everyone. My wife was a true angel, and I don't think I'll meet anyone in my life like that again."

In lieu of flowers, the family requests that memorials for the Lianne Takemori Fund for Professional Education be sent to the Mississippi Museum of Art (380 S. Lamar St.).

I had a chance to meet Lianne one random afternoon at the museum. She was so kind and she treated me as if we were old friends. We talked about art and our kids. My sympathies to her family and friends.

Lianne was a wonderful person that I never saw without a smile on her face. It was my great fortune to have the chance to work with her on a few projects.