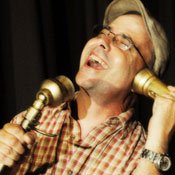 Richard Lawrence is the director of "Cabaret."

Richard Lawrence loves everything about stage performances--from bringing cast members together to the creativity that stems from acting.

"(Performances are) about taking something out of nothing and building a new world," he says. "It's about getting people together and mixing ideas."

As the director of the upcoming musical "Cabaret," presented by Fondren Theater Workshop and Actor's Playhouse, Lawrence, 47, hopes that passion will be evident to his audience.

The musical, based on the 1952 book "I am Camera" by John Van Drulen, and set in Berlin in 1931, tells the story of the young cabaret performer Sally Bowles (played by Kimberlee Wolfson) and her relationship with American writer Cliff Bradshaw (played by David Lind).

Lawrence says the musical depicts a decadent society prior to the reign of Adolf Hilter and Nazi Germany.

"It's relevant to today," he says about the musical. "It's about waking up and looking, and seeing what's going on around you. Hitler came to power because no one paid attention."

A native of Canton, Lawrence has performed and directed numerous area productions such as the bi-annual Rocky Horror Picture Show. Last fall, he played the role of the mummy in Fondren Theater Workshop's "Monster Monologues."

As director of "Cabaret," Lawrence is in charge of everything from casting performers to coordinating choreography and scenery.

Lawrence currently lives in Fondren and works full-time as a construction contractor.

Correction: In this week's issue, JFP events editor incorrectly listed the wrong venue for the Actor's Playhouse performance. The correct venues are listed above. We apologize for the error.