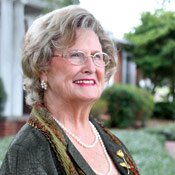 When Angela Hite met Vashti Muse 20 years ago while dancing for Hinds Community College Hi-Steppers, she received encouragement and support from Muse to continue dancing.

"You always wanted to be sure to be on the bus that they were on, because on the way to Neshoba, we went through Sepastopol where they were from," Hite says. "They would always tell stories about their younger days and how they met."

Vashti Muse, who was born in Leland, was a life-long educator who taught elementary school in Starkville from 1961 to 1978. In 1980, she began working at Hinds Community College as a reading instructor shortly after her husband became president.

Hite says Muse was always attentive to her student's needs.

"Mrs. Muse was one-on-one with all the students she came across," Hite says. "She was an advocate for students. If anyone ever needed anything she would help them. She would literally walk them to the office to help get them whatever service they needed."

Muse held a bachelor's and master's degree in elementary education from Mississippi State University and a developmental education specialist certificate from Appalachian State University. She taught reading on the HCC Raymond campus until she retired in 1996 and continued as an adjunct instructor until her death.

Memorials may be made to the Vashti Underwood Muse Scholarship through the Hinds Community College Development Foundation, P. O. Box 1100, Raymond, 39154.