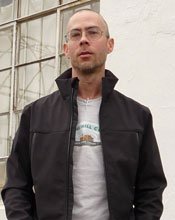 Richard Stowe, 43, might have his own office but is rarely found there-he'd rather be working with his hands: constructing buildings, restoring old cars, painting landscapes and creating monotype prints. Stowe's recent return to the Millsaps Arts District as the director of North Midtown Arts Center (formally known as One to One Studios) brings together those skills and his passion for Jackson to create a place for artists to thrive.

A Clinton native, Stowe attended The Portfolio Center in Atlanta, Ga. receiving a degree in design and illustration. After graduating in 1990, he returned to Jackson and along with 40 other artists and found his niche in the thriving Millsaps Arts District where he rented a studio at 121 Millsaps Ave., the same building he now manages. Stowe also ran The Arts Scene, a co-op art gallery a few feet away from his studio. Stowe says that in the late 1990s artist started leaving the district for a mixture of reasons. Stowe left the neighborhood to start another art gallery, Studio 3 on State Street.

"What probably happened more than anything was that artists my age or a little older moved," he says. "They either went out of state or put their studios in their homes.  There also wasn't a ton of young folks coming in and replacing them."

Stowe closed Studio 3 in 2005 and began working in construction on the Gulf Coast after Hurricane Katrina. He returned to Jackson in 2008 and crossed paths with Austin Richardson. who had moved into an abandoned building on Millsaps Avenue and opened One to One studios, an arts and entertainment venue with low-rent studios for artists. Stowe said he saw the district coming back to life and wanted to be a part of it.

"I wasn't involved in the arts for the past couple of years, but it looked like Austin was drawing a younger crowd and creating a need. It was almost like a ready model that just needed some fine tuning," he says. In 2008, Stowe rented a studio at One to One and started a printmaking business. He became involved with the daily operations, and joined Richardson as a partner in late 2009 when the studio underwent restructuring. The creation of North Midtown Arts Center is a part of a new model allowing the organization to have more community impact.

"The business model that I wrote is to be able to purchase the property, and that's the motivation behind North Midtown," he says.

In his spare time Stowe likes to work on his 1983 Porsche, spend time with his wife Nicole and teach printmaking classes at North Midtown Arts Center.

Richard Stowe's willingness to commit so much time to the Millsaps Arts District is no small act. People like Austin Richardson, Andy Young at Pearl River Glass Studios, Andy Hilton at Studio 2, NUTS, Good Samaritan and the Little Samaritan Montessori School are role models for the type of real world actions it requires to revitalize an area of town and vault it into recognition as a place to be!