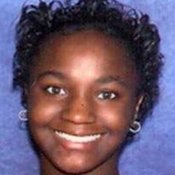 A Hinds County jury found Stanley Cole guilty of the murder of Latasha Norman this afternoon. Cole, 26, faces life in prison for killing Norman, his ex-girlfriend.

Cole told detectives the location of Norman's body, a wooded area near Tougaloo College, and police recovered her body on Nov. 29. In a police interview, he told investigators that he had hit Norman in the head during a fight. Roughly one month before her disappearance, Norman had filed an assault charge against Cole for an incident in Pearl.

Always nice to see justice served! I hope this verdict gives Ms. Norman's family some sense of peace. Hopefully this murderer will never see the outside world again after his appeals are spent.

It's a good moment, though, to pause and imagine that a future governor brings him to work in the governor's mansion, and then lets him out for "good behavior" after a decade or so. That's what Ronni and Sophie showed that Barbour did with all those men who brutally killed wives and girlfriends. (Of course, none of them were black.) But it is a good moment to stop and think how the family feels now and how they would feel to suddenly here that he was going free because the governor liked him. Grrr.