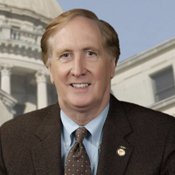 Rep. Bill Denny, R-Jackson, is one of the legislators sponsoring a bill to allow state officials to stack the Levee Board and take away local control.

Legislators introduced a number of bills during this year's legislative session that would have had some bearing on Pearl River flood control, although a few of the measures are dead. Among the living are Senate Bill 2936: "[a]n act to limit the powers of the Pearl River Valley Water Supply District to the basic purposes for which it was created: to preserve, store, conserve and control waters of the pearl river for domestic municipal, commercial, industrial, agricultural and manufacturing purposes."

The bill is a watered-down version of Brandon Republican Sen. Lee Yancey's earlier goal to "end" the Pearl River Valley Water Supply District. After revising this initial goal, Yancey finally filed a bill merely limiting the district's powers. He told the Jackson Free Press that he wanted more local control of the district, with some members being elected instead of the usual appointment process for board members. He also wants the district to surrender land it owns for eventual private ownership.

The bill appears to follow Yancey's motivation of transferring land control by providing for the transfer of lands belonging to the district to the counties in which the land lies. Critics of the Two Lakes development proposal for the Pearl River point out that the original-intent language of Yancey's bill could open the prospect of accepting Two Lakes promoter John McGowan's argument that the reservoir could be used for flood control--because flood control was included in the original "responsibilities" of the district when the Legislature created the district.

In fact, McGowan's lake plan requires the Ross Barnett Reservoir dam to operate as a device for flood control (rather than its current use as a means of supplying water to the city of Jackson for drinking and waste disposal). "The Pearl River Valley Water Supply District is not going to change the way they operate the dam," Flowood Mayor Gary Rhoads told the Jackson Free Press. "Even if they could, the reservoir won't work like that."

The district is currently only willing to contain an extra four feet of water in the event of a flood similar to the 1979 Easter Flood that inundated a huge portion of downtown Jackson and portions of Rankin County, partially because the reservoir is more comparable to a very large shallow bath-tub, with the average depth being 10 or 11 feet.

A return to the district's "purpose for which it was created" as envisioned in the Yancey bill could pave the way for a district more friendly toward Two Lakes, despite the reservour's mechanical drawbacks.

The Rankin-Hinds Pearl Flood and Drainage Control District Levee Board voted Monday to send a letter opposing the bill to legislators, arguing that the bill would turn over local flood control along the Pearl River to state officials who do not live in the flood-prone area around the Pearl River and who have no financial stake in the project.

Another bill authored by Coleman, House Bill 1548, which passed the House this month, creates a joint legislative committee to scrutinize the effectiveness of flood and drainage control districts in the state. Her bill would create a committee "to determine whether through the existence of these districts, the overflow and surface waters have been controlled to insure adequate protection to the inhabitants of the State of Mississippi, to study the economic impact of the potential development of lands within these districts, and to make recommendations regarding the districts' functional operations as they relate to their existence."

Making appointments to the committee would be the governor, the lieutenant governor, House speaker and the executive director of the Department of Environmental Quality.

Another bill passed by the House this month shows that legislators are closely watching the actions of the local Levee Board. House Bill 918, authored by Rep. Ed Blackmon, D-Canton, restricts the use of the state's eminent-domain law for economic development--with an exception for flood-control projects. The bill "shall not apply to drainage and levee facilities and usage, roads and bridges for public conveyance, (and) flood control projects with a levee component ...."

The legions of the DOA bills impacting local flood control contain two bills by Sen. John Horhn. Senate Bill 2825 would have allowed floating casinos on the Pearl River "within the corporate limits of a municipality with a population of 150,000 or more according to the most recent federal decennial census." Horhn's other bill, Senate Bill 2669, would have allowed the governor to appoint to the Pearl River Valley Water Supply District two members from a list of six names submitted by the governing authorities of the city of Jackson.