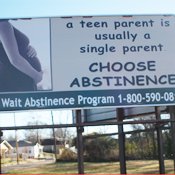 Billboards are part of a media campaign by the state Department of Human Services, funded by more than $1 million in federal support for abstinence-only-until-marriage programs.

"Sex Education in Mississippi: Why 'Just Wait' Doesn't Work," released Jan. 27 by the Sexuality Information and Education Council of the United States and Planned Parenthood, reviews the status of sex-education programs in the state's school districts, and gives an overview of federal abstinence-only funding. The report surveyed 53 school districts in the state and tracked the sub-grantees of the state DHS for abstinence-only-until marriage education.

In 2008, Mississippi received $5,742,594 in federal funds for abstinence-only programs through a Community-Based Abstinence Education grant (CBAE) and the Adolescent Family Life Act.

For 2009, the state received $4,678,644. For fiscal year 2010, however, President Barack Obama zeroed out the remaining $150 million federal funding for abstinence-only programs and Congress allocated $114.5 million toward teen pregnancy-prevention initiatives that include contraception and abstinence education.

Despite being one of the states that received the highest amount of federal funding for abstinence education, Mississippi's teen births are 60 percent above the national average.

"Starting with fiscal year 2010, the federal government has zeroed out abstinence-only-until marriage through all three funding streams," the Sexuality Information Council Director of Public Policy Jen Heitel Yakush told the Jackson Free Press. "We know that there has been several attempts by members of Congress who want to reinstate some of that funding, so we are being vigilant to make sure that funding remains zeroed out."

The shift in funding may mean that federally funded abstinence-only programs in Mississippi will have to shift their message, or seek alternative sources of funding.

Rick Berry, program administrator for the Department of Human Services, confirmed that CBAE funds are set to expire on Sept. 30, 2010. He said the department is currently unsure about the direct impact to sub-grantees, but said existing programs may have to incorporate the message of abstinence plus to be eligible for the new teen pregnancy initiatives allotted by Congress.

Current state law requires that school districts only mention contraceptives when addressing their failure rates. A recent study by the Teen Pregnancy Task Force, appointed by the state Legislature, discovered that of 121 Mississippi public-school districts surveyed, 91 did not have a sex-education policy, or did not know if their district had a policy. School boards can vote to implement comprehensive sex-education on their own, but districts often avoid the highly political and underfunded issue.

Yakush says the SIECUS study is currently the most comprehensive to date in Mississippi and added that the decline in federal funding is an opportunity for implementing new sex-education standards.

"One of the reasons we wanted to do the report is that we knew federal funding had been trickling down, and we knew that there were negative health outcomes for adolescents throughout the state in Mississippi," Yakush says.

The report analyzed the curriculum of the "Just Wait" abstinence program, operated by the Department of Human Services' Abstinence Education Unit. The Unit's Just Wait program entails a media campaign with printed material, billboards and public service announcements. The program also distributes the "ASPIRE: Live your life. Be Free" classroom curriculum. The federal Government Accountability Office found that the curriculum contained incorrect teen-health statistics and cites a "biased" activity called the "Cookie Exercise," which is used in the Just Wait program to teach students how easily STDs are transmitted.

The exercise involves having four students spit a chewed-up Oreo cookie into a cup of water and then swap cups with other students, while a fifth student receives a clean cup of water. The instructor then asks the students which cup of water they'd rather drink. According to the lesson, the four students represent sexuality activity while the fifth represents purity.

"The messages of this exercise are clear," The SIECUS report states. "Young people who have had sexual intercourse are dirty; they are the equivalent of spit."

The report goes on to criticize the exercise for offering only a brief description of STDs and no factual information about transmission.

A bill that passed 85 to 34 in the House on Tuesday attempts to tackle the state's high pregnancy rates. House Bill 837, co-authored by Alyce Clarke, D-Jackson, and Rep. John Mayo, D-Clarksdale, would require school districts to choose between implementing abstinence plus sex-education programs or abstinence-only programs.

Mayo claims the studies he has read regarding sex education are inconclusive and that this bill is a compromise for school districts to select the curriculum best suited to their demographics.

"It all depends what study you read, and it also depends on the make up of the school district it's being taught in," Mayo said. "I have read several studies: some show a decrease in teen-pregnancy rates and others are inconclusive. That's why we went the route we did."

Yakush said while some findings are inconclusive, overwhelming evidence finds that abstinence-only-until-marriage programs do not work. Felicia Brown-Williams, vice president of public affairs for Planned Parenthood of Alabama and Mississippi, said the state needs to adopt a comprehensive sex-education policy now rather than later to see a decrease in teen pregnancies.

"We feel that state laws need to be amended on sex education, to require districts to teach sex education and provide medically accurate evidence based instruction that includes information on abstinence and contraceptives," Brown-Williams said.

How great is it that CNN publishes this story today http://www.cnn.com/2010/HEALTH/02/02/abstinence.study/index.html?hpt=Sbin&hpt=T2 An abstinence-only education program is more effective than other initiatives at keeping sixth- and seventh-graders from having sex within a two-year period, according to a study described by some as a landmark. The study, published in the current issue of the Archives of Pediatrics & Adolescent Medicine, indicated that about one-third of the preteens and their young teen classmates who received an eight-hour abstinence lesson had sexual intercourse within two years of the class. What is this? The first study to come out to say this stuff actually WORKS? But, it does state specifically that it only works within a small window of time for most kids (6th-8th grade). After that, a combination of approaches works the best. (i.e., one including contraceptive education) I also guess that they consider the kids "waiting two years" to be a success. Bleh. This stuff is so subjective. I'd rather go with the idea that we received 5.7 million dollars of funds to implement abstinence only programs and we have the highest teen pregnancy rate. That to me is enough to say "this stuff ain't workin'". (Not that I didn't know that before)

If they can prove that abstinence programs work, then that would be a step in the right direction. Interesting comments/questions under the CNN story about this study.

Big folks deciding to convince teens to abstain from sex when their hormones are running rampant might be a bit like scientists deciding to control the weather midst a hurricane. Neither is likely to be too successful. Teens and sex are a given. Explaining the sacredness of sex and the importance of waiting is important. However, expecting teens to wait is not too realistic. Teaching them how to protect themselves and those they think they love, in conjunction with abstinance education, is essential.

Explaining that sexually transmitted diseases are very real, that they can kill, is a message that always needs to be conveyed to teenagers.Some teenagers do abstain from sexual activity because of these risks. Contraceptives do not protect one from sexually transmitted diseases all the time.Is abstinance not the best thing for teenagers.Sexual activity is not always a given for teenagers.Parents should not assume their children are going be sexually active,and then go out and buy them contraceptives.Peer pressure is certainly a major issue in teenagers making unhealthy choices.Parents deciding what they consider to be realistic or unrealistic is also sometimes a factor in the way teenagers perceive what is right and wrong and make their choices accordingly.I know more than several parents who are out of touch with the best interests of their children,and some who think their kids can have sex and it's just fine with them.They might as well ask them-Hey Johnny and Sue,want a carton of cigarettes,some beer,and a few joints to take to the party tonight.Ya'll can use our bong with that pot if you will be careful not to break it.

Even the new study's authors caution that it should not be used to guide public policy until a) the results are replicated in other studies, and b) other populations are tested. It's not a large sample, and it cannot be generalized to all students. It's also worth noting that the program in the new study is not like abstinence-only education in Mississippi. For one thing, it does not call for abstinence until marriage, which is essentially an evangelical rather than an educational message. (Few adults wait until marriage to have sex. We should certainly advise teens to wait until they are adults to have sex, but condemning all sex outside of marriage is culture war, not education.) Finally, the study did not include STDs and pregnancies in its results. Other studies have found that abstinence-only education delays the onset of sex. Unfortunately, those studies have found that when graduates of such programs do have sex, they are likelier than comprehensive-ed students to become pregnant or infected with STDs. Because they have been taught that abstinence is the only way to avoid pregnancy and STDs, they are less likely to use condoms when they do have sex.

Unfortunately, those studies have found that when graduates of such programs do have sex, they are likelier than comprehensive-ed students to become pregnant or infected with STDs. Because they have been taught that abstinence is the only way to avoid pregnancy and STDs, they are less likely to use condoms when they do have sex. Didn't I read somewhere up there that abstinence programs only allow talk of contraceptives concerning their "failure rate"? Hell, I'd think it was a waste of time to use one as well.

And, because I failed to mention it earlier, that Cookie Experiment thing is just gross.