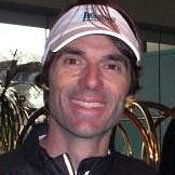 John Noblin is director of the Mississippi Blues Marathon Jan. 8 in downtown Jackson.

As the director of the fourth annual Mississippi Blues Marathon, John Noblin is busy making last-minute arrangements for the two-day event, which includes a fitness expo and outdoor concert. The Jackson native is a longtime marathon runner who got his start organizing races in 1993 with the Tour LeFleur, a professional cycling race in Jackson. Five years ago, he collaborated with local business leaders to bring the Blues Marathon to Jackson, forming a sponsorship with Blue Cross Blue Shield of Mississippi. Noblin, 45, lives in Jackson with his wife, Jill, and two daughters Keavy, 16, and Clayton, 13. He discussed this year's race with the JFP:

How have you seen the Blues Marathon grow over the past four years?
It has grown in terms of the number of runners. But what I have seen grow is the community's interest and the enthusiasm of neighborhoods that we run through. People look forward to getting out and cleaning up--getting the streets and their yards ready. The running community in Jackson has grown. Every year our local numbers have grown significantly. The city's support (has grown.) As we bring more people in from out-of-state, the city's realization that it promotes Jackson and drives tourism has grown.

What is the economic impact of the marathon on Jackson?
Last year, we had runners from 47 states and eight countries. This year we have 46 states and six or seven countries. ... Since we moved downtown, we are selling a lot of downtown hotel rooms. We are finding that a surprising number of people are staying two or three nights. We had real good feedback last year from downtown bars and restaurants saying that they had lots of runners. Without being able to put a hard dollar on it, clearly, it is driving business, and there is a lot of business being done from the equipment we rent for the race locally, to folks who come in from out- of-town.

Is anything new or different this year?
The race just happens to fall on Elvis' birthday. We have licensed the event through Elvis Presley enterprises. A lot of the T-shirts and paraphernalia will be Elvis oriented. We have partnered this year for the first time with Downtown Jackson Partners and will have a special Downtown after Dusk the Friday before the race at the War Memorial grounds (featuring) a concert with Brandon Bennett, the international Elvis tribute artist.

Will you be running in the marathon?
No. I'm not ever able to run in this one. It's kind of a busy day for me. We pretty much go nonstop from Friday morning to Saturday afternoon.

The Mississippi Blues Marathon (26.2 miles) and Half-Marathon is Jan. 8, 2011 ending in downtown Jackson. To see a course map, schedule of events or to register for the race, visit the marathon's website.. Downtown After Dusk: Marathon Edition is Jan. 7 at 100 S. State St. next to the Old Capitol Museum from 5 p.m. to 9 p.m.; Admission is free.