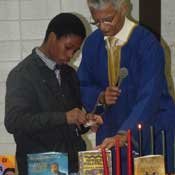 Fifteen-year-old Elijah Jamison stood somberly behind a table decorated with a red, black and green African flag as he lit a candle in honor of kujichagulia—Swahili for the Kwanzaa principle of self-determination.

"Self determination, from my perspective, means in simple terms that you would do anything to fight and save the world," the young aspiring minister said.

The weeklong Kwanzaa celebration, held at the Medgar Evers Community Center through Jan. 1, is in honor of the African American holiday that affirms the dignity of humanity, tradition and culture through its seven principles: unity, self determination, collective work and respect, cooperative economics, purpose, and creativity and faith.

Standing in front of a portrait of the late civil-rights leader Medgar Evers, Jamison joined Ward 2 Councilman and Malcolm X Grassroots Movement member Chokwe Lumumba, who explained the significance of the flag. Red represents the blood people shed for liberation, black represents the people, and green represents the land stolen from African ancestors.

Attendees watched a clip from the film "Haiti: The Untold Story." Earlier this year, Lumumba and other members of the Malcolm X Grassroots Movement went on a fact-finding mission to the country after a major earthquake in January, 2010. During a panel discussion, Lumumba joined Jackson State University Professor Safiya Omari, long-time Chicago educator Hannibal Arfik and Malcolm X Grassroots organizer Akil Bakari to explain the historical significance of Haiti and how it relates to self-determination. Lumumba gave a first-hand account of refugee camps where citizens lacked food and adequate shelter while insect bites covered small children's skin. But since long before the earthquake, Haiti has been an oppressed society. After gaining independence as the first black republic in the western hemisphere, France forced the country to pay reparations in 1825—permanently destroying the country's wealth.

"Imagine that, this country comes in and says it's to occupy you, or you have to pay this country because you deprived them of your expected slavery," Bakari said.

The ceremony ended with an umojaa circle, in which all participants held hands and took turns saying what kujichagulia meant to them. Children spoke about the desire to fufill their divine purposes. A man paid homage to Bob Marley. One woman broke down in tears as she vowed to educate others about racial discrimination that still persists in Mississippi today—even though she claimed she lost her job for speaking out. As the smell of curried chicken drifted into the community center for that night's karamu feast, we held up thimble-sized cups of water and toasted each other, then ended the ceremony chanting "Harambee," Swahili for "Let's all pull together."