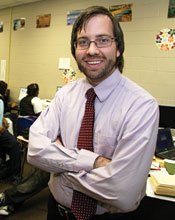 Daniel Fuller isn't your mama's English teacher. He knows getting students excited about 16th-century literature requires a little innovation. Recently, the Forest Hill High School teacher required his students to create an MP3 file of a scene from William Shakespeare's "MacBeth" using recording software. Students read the play out loud, recording it using microphones from their laptops, and added sound effects and music.

"It has created a lot of buzz," the New Mexico native says. "... When we told (the students) we were going to be studying 'MacBeth,' it may not really have grabbed their attention. But when we moved to the laptops, and they set up a recording studio, that drew in students who would typically be turned off."

Earlier this year, Jackson Public Schools named Fuller as its Teacher of the Year for his use of technology in the classroom. Fuller also hosts web-training seminars for teachers and recently helped Forest Hill launch a new website. His classroom activities include text-message conversations between book characters using post-it notes, creating Facebook profiles for characters and using video to teach his students.

Fuller says technology must stimulate a deeper level of thinking to fully engage the students.

"Anytime I bring technology in, I try to think about what my teaching goal is," he says. "It's real tempting to bring in new technology because I'm really excited about it, but there has to be some learning objective."

A few years ago, Fuller, 34, decided to change career paths from running his web-development company to being a teacher. His wife, Janet, who teaches English as a second language in the Madison County School District, inspired him to work with students.

"I was watching her work and saw the impact she had on her students," he says.

Outside his classroom, the father of two is an active member of the Mississippi Scholastic Chess Association and serves as its board secretary. He also helped start the Forest Hill's chess, drama and literary clubs.

He says his students give him a glimpse into Jackson's promising future.

"I hear a lot of my students talking about wanting to live and work in Jackson," Fuller says. "... I think there is so much going on in the city with all the development, and it's an exciting place to be."

Enjoyed the article. Keep up the good work Mr. Fuller!