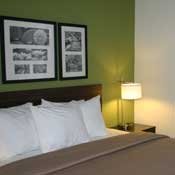 The LEAD Group, a Jackson-based team of 12 African American investors, completed its first development project yesterday with the opening of a Sleep Inn & Suites in downtown Jackson. The 67-room hotel is located between Pearl, Pascagoula and Gallatin streets, where investors hope it will attract visitors from downtown and Jackson State University.

The LEAD Group received $2 million in federal Recovery Zone Facility Bonds from the Hinds County Board of Supervisors to complete the $4.7 million project.

The project has seen substantial delays. The LEAD Group reached a franchising agreement with Sleep Inn in 2008. Construction work for the hotel began in June 2009 and extended past an initial projected completion date at the end of 2009. Work then halted early this year, when Utah-based Zions Bank refused to extend construction financing into 2010 because of the financial crisis. The LEAD Group temporarily sold the land to JRA in February, then bought it back several months later after securing new financing.

The finished hotel boasts refrigerators in every room, free wireless Internet and a hot breakfast for guests.

While it is too early to project occupancy rates, Gibbs said that the LEAD Group is discussing plans to hold fundraisers for local non-profits at the hotel.

Gibbs said that the group would like to buy properties adjacent to the Sleep Inn, but is not making firm commitments, yet, because of the time it took to complete the hotel. The LEAD Group already owns a strip of buildings on Pascagoula Street east of the hotel that it intends to renovate.

"We would like to do it in 2011, but it would be dependent on financing," Gibbs said.

The Jackson Redevelopment Authority met immediately following the hotel's ribbon-cutting and heard a proposal for another downtown hotel. The new proposal comes from local businessmen Dean Blackwell and Socrates Garrett, along with Atlanta-based lead developer Roger Landry. Their plan calls for a 130 to 150-room hotel at the corner of Court and Lamar streets, along with a 300-space parking garage.

The group has not yet secured an agreement with a hotel operator but already owns the property, currently home to a warehouse. Brookins said that the hotel could serve visitors to the Mississippi Museum of Art, the federal courthourse and Jackson Convention Complex. Blackwell referred a call for comment to Landry, who was not immediately available.

"The thought is that the more we can get a denser footprint, the better off we are," Brookins said.