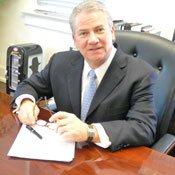 The Greater Jackson Chamber Partnership is placing a priority on the metro's medical industry expansion by forming a new health-care initiatives division.

The chamber announced the formation of the new division yesterday, naming Lindsay Buford its vice president. Over the past year the chamber has worked with area hospitals such as the University of Mississippi Medical Center and Baptist Health Systems to support their growth. Chamber President Duane O'Neill said the division will prioritize those projects, ensure collaboration with city and industry leaders, and promote health and wellness.

"The efforts that we have going--not just here in the partnership, but in our economy in the central part of Mississippi--health care is just so large that we have numerous initiatives going, and it just got to a point that we thought it was best to identify it as a major part of our organization," he said.

The division will also oversee the chamber's health-care community stakeholders committee, which is made up of 140 providers, leaders and businesses connected to the area's medical industry. O'Neill said the metro has the potential to become a regional destination for health-care treatment.

"A lot of people in different places say we have some of the best doctors in a particular field in the entire country,] right (here) in Jackson, Mississippi," he said. "... We need to promote it better. It's not only good for our reputation, but it's encouraging for all types of economic development in the future. People want to go where there is a good quality of life and good health-care facilities."

UMMC represents 10 percent of the Jackson metro area's economy and is on track to bring in $1.2 billion in revenue this year. This week, Baptist Health Systems announced plans to construct a five-story mixed-used office building on State Street where Keifer's restaurant is currently located. Baptist has long-term plans for development on the 13 acres of land it owns in Belhaven, including a parking garage and condominiums.