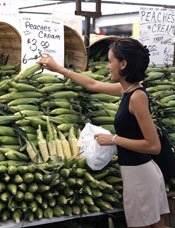 Mike Steede, owner of Steede farms in Lucedale, Miss., took over the farm his family has operated for the past 150 years after he retired from teaching agriculture at the Mississippi State Extension Service last year. In May, he formed a Community Supported Agriculture program, which delivers in-season fruit and vegetables weekly to 36 members from his 40-acre farm.

Steede has seen a demand for locally grown food. He said he was initially worried about the U.S. Food Modernization Safety Act the U.S. Senate passed last week, but now feels satisfied with provisions that exempt small farmers from tighter regulations.

On Nov. 30, the U.S. Senate passed the bill that would give the U.S. Food and Drug Administration the authority to make mandatory food recalls, require producers to have plans to address safety risks, hold them accountable for contaminated products and require stricter food-safety testing. The House approved its version of the bill last year. Once the two measures are reconciled, Obama is expected to sign the bill.

Last week, the bill hit a hurdle. The Senate version of the bill places new fees on food facilities. Under the Constitution, all legislation that increases revenue sources, like taxes and fees, must originate in the House. The Senate could take additional measures to save the bill, but that would require another vote—challenging for a packed lame-duck session.

The Centers for Disease Control and Prevention reports that approximately 76 million people in the U.S. suffer from food-borne illnesses every year—300,000 are hospitalized and 5,000 die. Food-safety advocates pushed the bill after contaminated peanut butter products from a major food supplier killed nine people and poisoned 20,000 in 2008. Most salmonella outbreaks, the advocates say, originate in factory-farm environments.

Opponents of the original bill cited the high costs involved for small organic farmers running operations with low overhead and small margins. Sens. Thad Cochran and Roger Wicker both voted against the House bill. In a statement, Wicker said that modernizing food safety should not "unduly burden food producers and add to the national debt."

But Montana Sen. John Tester added an amendment that exempted small, low-risk food processers from the bill. The provision applies to farms that sell more than half their goods directly to consumers—in venues like farmers' markets—and make less than $500,000 in annual sales. Food distributors will have to pay fees for federal inspections.

Steede is working with the Mississippi Department of Agriculture by hosting workshops for produce farmers who want to form CSA's or get retailers to buy their product. He says he keeps paperwork on all pesticides used and ensures sanitary conditions for harvesting produce in line with state guidelines. Because his operation is small, he has a relationship with most of his customers.

"The chain of command is pretty short. I grow it, and they eat it," he says. "If there is a problem, they know where I am at."

The majority of Steede's customers are families with small children who are concerned about processed foods causing obesity, and who want to support local farmers, he said. "People are more concerned about their food supply now than ever before," he said. "We are seeing food prices going up. The number of farms is going down. We have fewer people today feeding America than ever before."

Mississippi Hospitality and Restaurant Association Education Director Grady Griffin has also been working with the state Department of Agriculture to help small farmers sell their products to restaurant. He says the trend is simply following consumer demand.

"People are trying to source more local ingredients because that is what the consumers are asking for," he says. "As the consumers gets more educated about where they food is coming from, we have to respond to their requests. It has become more prevalent than it was a few years ago."