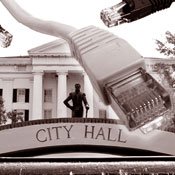 The Jackson City Council yesterday approved the purchase of two software packages that will allow citizens to make and track complaints and requests related to city services online. The two purchases are the technological backbone of the city's proposed 311 system, one of Mayor Harvey Johnson Jr.'s pledges from his campaign.

The first part of the system, Cityworks, by Utah-based Azteca Systems, will allow city departments to track infrastructure like fire hydrants and roads, using a mapping technology called Geographic Information Systems, or GIS. The software, which cost $170,000, will also log citizen complaints like reports of potholes and automatically generate a service request for the relevant city department.

The second piece, Request LoGIStics, works with Cityworks to give citizens a way to report problems using the city's website. The software, manufactured by Timmons GIS, costs $126,000, including installation.

Ultimately, Johnson intends for the 311 system to record citizen complaints via a telephone hotline. Citizens will be able to report problems by calling 311. City spokesman Chris Mims said that the city still needs to secure Public Service Commission approval for the telephone hotline.

"We're still in the process of working with the Public Service Commission to actually get the telephone number '311,'" Mims said.

Mims said that he hopes to have it on the PSC agenda for consideration in September.

Read "City Eyes Open-Government Technology," about how other cities have used similar technology.