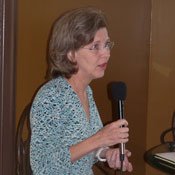 "I don't think we are where we need to be in terms of overcoming our history," she told a crowd of about 30 at Koinonia Coffee House. "... This state has worked very hard to keep black people uneducated. We can't deny that, and in my opinion, we aren't past that."

Womack said that the state and the federal government have traditionally denied blacks equality in education through unequal funding and polices.

Parents for Public Schools, a national nonprofit, is an education advocacy group that seeks to address the issues and policies of the federal and state education system by working with communities and parents. A group of parents founded the organization in Jackson in 1989. Currently, the organization has 15 chapters in 10 states.

Womack said that PPS remains neutral on the issue of charter schools, but as a parent she is opposed to them because charter schools only provide equal education to few students.

During the meeting, Carolyn Jolivette, PPS director of school reform initiatives, said children need to be educated about African American history so that they can also join the conversation.

"My generation just stopped. In an effort to give our children a better life than we did, we forgot to teach them some of the real realities of where they are and who they are strictly because of race," she said.

Womack also championed the progress the district and PPS has made. PPS' Ask for More Arts initiative is now in 30 of 39 JPS elementary schools. The purpose of the initiative, she said, is to help students develop critical thinking skills through art projects and apply those skills to other subjects.

"With (No Child Left Behind Act) and standardize testing, what parents begin to see is a real narrowing of the curriculum," she said. "(School districts) are focusing primarily on reading and math, and getting students to take a test. What we saw is that kids in elementary schools weren't going out for recess any more; they were doing a lot of worksheets and bubbling in, and this isn't quality education."

The initiative provides training for teachers on how to incorporate arts into all subject areas, and brings professional artists into the schools to work with students.

CORRECTION: A group of parents founded Parents for Public Schools in Jackson in 1989, not 1999 as the article previously stated. We apologize for the error.

I agree this is a major conversation that is long overdue!