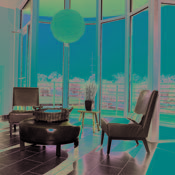 he Ramey Agency is featured in "Where We Work," a book showcasing inspiring workplace interiors from around the world.

The Ramey Agency has plenty to brag about. The Jackson-based branding and marketing firm boasts an impressive roster of clients, from Viking Range, to Millsaps College, to the Mississippi Museum of Art. Now, Ramey has one more accolade to add to its already full trophy shelf--a spot in "Where We Work," a book published by Harper Collins that showcases inspiring interior designs from workplaces around the world.

The book, inspired by the website "This Ain't No Disco (It's Where We Work)," culls 45 of the most impressive office designs from hundreds of submissions. Compiled by Ian McCallum, the book recognizes Ramey's Fondren office for its combination of open spaces--to facilitate collaboration--and private work areas for indivdual tasks and thinking. The 1,268-square-meter space on the third floor of the Fondren Place building is organized around a skylit "town square" consisting of a long work table; an open, TV-ready kitchen, courtesy of Viking; and a massive granite meeting table. Sleek, modern offices, cubicles and meeting rooms ring the central meeting area.

Fondren Place is a fairly new building, and Ramey has only occupied its current space since July 2008. Before that, the firm spent 15 years on Highland Colony Parkway in Ridgeland. Over time, that location grew stale, Chief Operating Officer Jim Garrison says.

"We just wanted a new space to capture the agency as it was in 2008, not 15 years before," Garrison says.

Ramey's principals worked with Jackson architecture firm Canizaro Cawthon Davis on the office design, drawing on an "idea book" that CEO Chris Ray had compiled over five years. To acknowledge the firm's Southern character, they incorporated a number of antique features acquired from Jackson's Old House Depot. Cypress planks salvaged from a Delta shack, a massive beam and swinging doors on the conference room balance the office's modern surfaces.