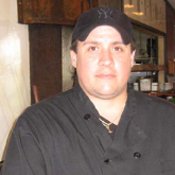 Co-workers remember BRAVO! chef Brian Cicero as a kind hearted and humble man who was passionate in the kitchen.

From the East Coast to Jackson by way of Texas, Brian Cicero was a luminary within the BRAVO! kitchen. Brian, 38, passed away in his sleep Saturday, April 17.  Later, doctors discovered that he had a heart condition.  As his family pastor said during the memorial service:  "Brian went to sleep Saturday night, and the Lord called him home."

In his signature black chef coat, Brian looked like an Italian mob boss on the outside, but inside he was all heart.  He was an ideal employee: engaged, creative and accountable. Brian exposed hundreds of people each week to outstanding soups he dreamed up "on the fly," pasta entrees with vivid color and flavor, and wonderful weekend brunch specials laden with richness and texture.

To his fellow workers, Brian was the rock, the man to lean on, the man to get it done. Brian was the right-hand man for BRAVO! chef Louis LaRose, and they shared the passion of fishing on the reservoir.  "I was lucky to have become a friend to Brian outside of work as well," Louis said.  "Like Brian, I too, keep from getting close to people. However, I think we both managed to befriend one another a little more than either would personally admit.  We fished, watched fights and sometimes just joked about random things.  I will miss him dearly."

My BRAVO! Co-owner Dan Blumenthal remembers Brian as a humble, caring employee.
"Still waters run deep, and this applied to Brian," Blumenthal said. "He let very few people inside, because I think he was a bit scared to reveal what a good, caring person he was. His sense of humor was near and dear to me. He was a wonderful employee and will be sorely missed."

Almost 40 chefs, wait staff and managers from BRAVO! and its sister restaurants attended Brian's funeral. Brian's mother, Toni Hawkins, made it a point to share that Brian struggled with self-worth, but it was through his BRAVO! family that he found a safe place to try, fail, try again and not fail.   This important distinction provided the fertile ground for Brian to develop and hone his culinary skills, come to peace with who he was and be able to accept the fact that he was important to others.

Jeff, well done, my friend. I am saddened by the loss but rejoice in the life of Brian and his Bravo! family. Certainly, Brian was a special man, had a special place in the hearts of many and will be missed.