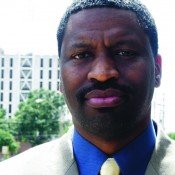 One example of how state and local government continues to attack public education in Mississippi is a bill that would allow charter schools, said NAACP President Derrick Johnson during a community meeting at Koinonia Coffee House today.

"Charter schools undermine public education," Johnson said. "Anytime you use public resources to provide a quality education for a limited number of children, and the rest of the children are left behind, you undermine public education. At most, under the charter school program, only about 20 to 25 percent of the children are served. What happens to the other 75 percent? We've got to get more burglar bars on our houses, and we got to get more burglar alarms on our cars to deal with them, and the kids end up rerouted to the prison system."

The New Start School Program and Conversion Charter School Act of 2010, Senate Bill 2293, would create a new process for transforming some failing public schools into "New Start Schools" and "Conversion Charter Schools" that use district funding. The bill stalled in the House on March 27 on a motion to reconsider, and the House and Senate have since adopted a conference report on the bill. Gov. Haley Barbour told reporters on March 31 that he plans to sign the bill.

Johnson pointed out that school districts comprise the largest budgets for state government in every county and produce more millionaires than any other public program. But he added that people in power have worked to tear down the public school sector and steer the money elsewhere.

"By 1961, we had 17 (private) academies in the state, because they knew the federal government would order the integration of the schools," he said. "By 1967 we had 33. Today there is a private academy or two in every county where the black children make up 25 to 30 percent of the school population, except northeast Mississippi because blacks barely make up 10 percent of the population."

Johnson added that charter schools are the continuation of the school de-segregation fight.

"We have starved certain school districts in the ongoing fight not to integrate these school districts," Johnson told a crowd of about 100. "Since 1870 forward, there was always a push to undermine the education of black children in the state because of two primary reasons---who controls the money, and competition for the labor force--because white communities don't want black children competing with them for jobs."

Rep. Cecil Brown, D-Jackson, said legislators who are advocates of public education made a point to adapt the new charter school law so that charter schools and public schools won't be competing for the same funding.

"The state steers no money out of public education to these new charter schools created by the bill," Brown said. "These schools are not competing for the same money. In fact, one of the reasons we passed the bill we did was because there wouldn't be any additional money needed. I know Derrick and some of the people have legitimate concerns about this, but I think we've addressed most of these concerns."

Brown added that the political atmosphere at the state legislature made a charter school expansion unavoidable, so legislators "worked to get the best charter law we could that wouldn't affect public schools."

Amen!! Why the hell does Obama want charter schools?

An answer to DrumminD21311: Because ANYTHING is better than what we have in 70 percent of Mississippi's public schools. Shake it up! Do something different. Think 'outside the box.' Don't rearrange the deck chairs on the Titanic. More of the same means more failure.

I went to public school and went on to get a master's degree. What a coincidence that the "worst" schools are in the poorest areas. Creating charter schools ignores the real problems and will probably exacerbate them for the other 75%. Why not create programs that revitalize those communities and provide more social services to create better environments for children to prosper in? Oh wait, conservatives hate that. That's why they attacked ACORN, that's why they attack Planned Parenthood, and that's why they want to completely get rid of welfare. What happened to "No Child Left Behind?" Obama should call his education plan "Ok, now we're leaving children behind."

I went to a public school also, but I had very involved parents. It is the number one predictor of success, beyond race or class.

There was a report from the Harlem, NY based charter schools from administrators and community people recommending and praising the use of the charter school system. I'll see if I can dig it up.

Exactly how would the creation of charter school that would send all its students to college make things worse for the other 75% rather than motivate change in those schools? What evidence is there for that argument? Or is it only a theory? Often leadership is lacking. Charters DO NOT necessarily drain resources. The Oakland, VA public schools control Charter schools. They are public charter schools. Those schools operate under contracts. Why not offer choices to poor families?

All I hear from Mr Johnson is complaining. I didn't see him offering up any alternative solutions to the failing schools. So until he does, he just comes off as a whiner. Solutions is what we need more off, not more negativity. And that's true for so many problems plaguing our state and country.

That was supposed to be "the Oakland, California" public school district!