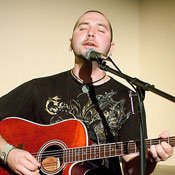 People come up to Shaun Patterson after a show and tell him, "We like the covers that you play but we really want to hear more of your original stuff." These are magic words to a singer-songwriter's ear, and Patterson says he is hearing it more and more lately. "Apparently, I'm making people happy," he says cheerfully.

Patterson's music is heartfelt, acoustic rock. He lists Don Henley, The Eagles and Gin Blossoms as some of his influences, and his tender songwriting style seems to draw from these. "A lot of my songs are about trials and tribulations in my life, and I try to write songs that are relatable to other people," he says.

"Moving On" is a song based on Patterson's own experience with a past relationship. Anyone who has ever reached that point in a relationship where it is obviously not meant to be could relate to the lyrics: "I don't want to start over/I've seen where we go/From one friend to another/I hope you find what you're looking for." Patterson's guitar-picking style accompanies the ballad nicely, and while it sounds sweetly simple, he demonstrates a true talent for the instrument.

The singer-songwriter has a strong yet effortless vocal presence on each song, gritty in the appropriate places but not over the top. Patterson is sincere both in lyrics and performance. "One More Time" is an earnest plea for a second chance at love: "Let's start it over baby one more time/I promise I'll do better if you'll let me inside/And all the things I'm saying just aren't coming out right/But I know I want you in my life/Ain't that enough?"

Patterson's music tugs at the heart without being sappy. He is genuine, and he says that he hopes this comes across in his live shows as well.

"I put 100 percent of my heart into what I'm playing. If you come to one of my shows, expect genuine passion and energy, the 'real deal,'" he says.

Patterson, 27, grew up in Clinton and is married with a 2-year-old son. He describes himself as "the quintessential starving musician."

His passion for music developed at an early age, and he has been playing guitar and writing songs since he was 16. At the same time, as he grew older, he wanted to always be able to provide for his family.

But Patterson's former employer and coworkers at a food-service company recognized his passion for music and encouraged him to leave his day job and pursue his dream of playing music  full time.

Besides "starving musician," another term to describe Patterson is "workhorse." He plays nearly every night of the week, and sometimes twice a night in two different locations.

"I'm just trying to get as much exposure as I can," he explains. "Music is my job now, and when I'm not playing shows I'm booking (them)."

His wife Amber, is a stay-at-home mom, so he is supporting his family with what he brings in from his performances in clubs, at private parties and weddings. With this in mind, Patterson says he does not want to just play in Jackson: "We're about to move to Collins, Mississippi, which will allow me to play in Hattiesburg as well as Jackson, and I've even got some shows lined up in Gulfport."

But his aspirations do not stop with south Mississippi. Patterson's ultimate goal is to "make it." He looks to other Mississippians like 3 Doors Down for inspiration, and performing nearly nonstop around town has led him to make some significant connections. "I was playing at Fenian's one night, and Nathan Glenn (executive chef and part-owner of The Auditorium) was in the audience. After the show he came up and said he really liked my work and wanted to get me to perform at The Auditorium."

Mike Frascogna, a Jackson entertainment lawyer, also liked what he heard, and he offered to help Patterson get his music recorded for distribution. Coincidentally, Frascogna also represents 3 Doors Down.

There is really no excuse for anyone in the Jackson area to not check out Shaun Patterson in the next couple of months, because he will be all over the place. He'll be at Sam's Lounge Sept. 12, The Auditorium Sept. 17 and 26, Time Out Sept. 23, Que Sera Sera Oct. 1 and Fenian's Oct. 7. Check his full schedule at http://www.myspace.com/shaunleepatterson.