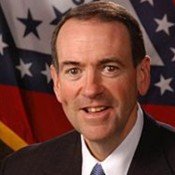 Former Arkansas Gov. Mike Huckabee will speak at a benefit for the Salvation Army on Wednesday, Oct. 21.

Former Arkansas Gov. Mike Huckabee and Republican presidential candidate Mike Huckabee used his address at Salvation Army's annual dinner in Jackson last night to criticize the role of government in assisting in emergencies such as Hurricane Katrina. "Frankly, I'd rather see the kind of help that people need come through a relief agency than necessarily just come in a check in the mailbox from the government," Huckabee told reporters before the dinner.

"Because behind every bit of help that the Salvation Army gives is not just sterile, cold and indifferent," Huckabee said. "It is also being delivered by somebody who has a heart filled with love and who wants to share more than just the basic human needs, but also the emotional support and the spiritual support. It's one thing to just give a person a sandwich, but sometimes a sandwich plus a hug means a whole lot more and makes the sandwich taste better."

Huckabee, who placed first among potential 2012 Republican presidential candidates in a Rasmussen poll, said economic recession calls for "a revolution of conscience and a revolution of charity," Huckabee argued.

"I've always believed this: if people who call themselves Christian believers would regularly give a dime out of a dollar, we would not need government assistance programs,A" Huckabee said. A"The reason that government takes half of what we have is because they inefficiently do what could be done much more efficiently if handled by families communities churches and people actually close to the ones who are getting the help."