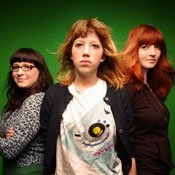 One of the bigger waves of last year in indie rock was the return (for the umpteenth time) of a lo-fi, reverb-heavy sound indebted to British bands like Joy Division and the Jesus and Mary Chain. A whole crop of new bands, many of them from New York City, seemed to materialize at the same time, playing variations on the same theme: often-indecipherable lyrics, half mumbled, half sung, with walls of distorted guitar and a steady '80s-style drumbeat.

Vivian Girls, from Brooklyn, were perched right on the crest of that wave. In addition to that mumbly, lo-fi aesthetic, they share a home (Brooklyn) and a former drummer with Crystal Stilts, who performed in March at One to One Studios.

But where Crystal Stilts often comes off as druggy and detached, Vivian Girls make lo-fi that manages to sound fun and mischievous. They're an all-girl trio, and their songs have the adolescent brio of early punklike a gaggle of teenagers playing hooky in the girls' bathroom.

The lyrics to "No," a track on their 2008 self-titled debut, consist exclusively of the song title, sung over and over. It's a classic punk move80 seconds of pure nihilismbut cascades of backing vocals transform it into something affirming and pretty. Many Vivian Girls songs play with that dichotomy between punk and pop, lo-fi and girl group.

On their new album, "Everything Goes Wrong," the girls don't alter that formula so much as refine it. In songs like "Can't Get Over You," the combination of classic pop hooks and jangly, unhinged guitar sounds less like a forced hybrid or a faddish construct and more like smart, durable song writing.