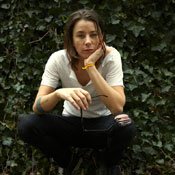 Melissa Ferrick headlines at OUToberfest on Saturday at Hal & Mal's.

Melissa Ferrick, 39, has been busy recording a cover of Radiohead's "High and Dry" for her forthcoming album, but has stopped long enough to call me. She is slightly flustered, but calms quickly as we talk about Massachusetts (where she grew up and later attended Berklee College of Music) and our common experiences with the Portland Ore., queer community. She reveals that her "late summer project" will include other songs from her "glorious 20s" like Aimee Mann's "Deathly" and David Gray's "This Year's Love."

Ferrick inspires comparisons to Melissa Etheridge and Ani DiFranco with her earnest lyrics and skilled guitar playing as well as living out loud as a queer musician and activist, but you've probably never heard her on the radio. Ferrick will headline the OUToberest main event on Saturday Oct. 10, Mississippi's largest annual LGBT festival. Ferrick will perform a solo set Saturday night at Hal & Mals.

It's been a year since your last album, "Goodbye Youth," and you're about to release the new EP on iTunes. What comes next?
There's definitely an album comingI started writing and pushed the EP behind. The problem with me is that I get so many ideas and then I half do them, and then I get another idea and  then I'm always in forward motion. My family and Brynamy best friend and managerare the ones who push me to finish these songs; fans who have become friends also help me finish. It is always a work in progress. I feel like my life is that, a total work in progress.  Since "Goodbye Youth, " I had to strip everything away.  I look back on the music I've made and I think of the people who buy itmy fans.

Saturday night you'll be playing here in Jackson at OUToberfest. Why play this festival?
I haven't been to Mississippi in a long-ass time.  When I got asked to come to Jackson, and I've never even been there, I looked online and I'm like, OUToberfest is their (Mississippi's) biggest queer gathering.  I'm psyched to be there.

Everything I've read about you reveals that you're very open about being a lesbian. Why do you choose to be so open?
Well, you know that's mostly true. When I got signed to Atlantic in 1992, I had opened for Morrissey in '91, signed in '92, album in '93, and they wanted me to come out. Melissa Etheridge had just come out, and so it was a way to get press, regardless of how good your record was.  but I felt used. Why can't they sell my record because it's a good record? My second album, "Willing to Wait," came out and then I felt ready to come out at 24 and ready to say 'I am queer,' and that was the year Jewel put out her album, and she was also on Atlantic. Her songs hit the radio, and then they became uninterested in me talking about being queer and liking girls and how hard it was. ... It was hard to watch my record get thrown under the bus and my sexuality being used.  So then I got dropped and was left alone with no record deal and this fan base.  That was a moment of clarity about what is important.  People are there for my music first, but also that I'm living my truth.

Any advice for up-and-coming artists and musicians?
I taught this summer for the first time at Berklee. My dad is a teacher, and my grandmother was a teacher, so I guess it's in my blood.  I tried to convey (the importance of) using multimedia and community. ... With "Goodbye Youth," I went with the Internet. Now it's cheaper as a music artist, and now everyone wants to put out a record or be on iTunes. What I'm trying to do now is trying to seek out other media, Web-based media, or people who are obsessed with YouTube or whatever.

My advice is to seek out others who are like you, but not exactly like you. I think about the Andy Warhols who surrounded themselves with incredibly talented people who had the goal of making art, of being accepted for who they are.

What are you listening to now?
I just listen to classical and jazz and NPR while I'm recording and I guess I've been listening to the songs I'm covering. Listening to old Barenaked Ladies and old Bruce Springsteen and Ani's latest, "Red Letter Year." I love Chris Pureka, Natalia Zukerman, Anne Heaton, Edie Carey, Andrew Ripp.

Melissa Ferrick will perform at Hal and Mal's Saturday, Oct. 10, at 6 p.m. Tickets are $20 For more information on all Outoberfest events visit http://www.outoberfest.com