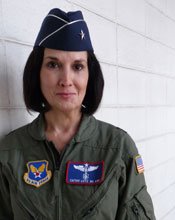 Since being named the first female brigadier general in the history of Mississippi in March, Catherine Lutz has become a role model for women, as well as the entire state.

Lutz, 54, says that throughout her career in the Mississippi National Guard she has always had concrete goals. At 27, she decided to join the military to travel and meet new people. Today, Lutz is dual-qualified as a flight nurse and a Medical Service Corps officer. She currently serves as Air National Guard assistant to the chief nurse at Bolling Air Force Base in Washington, D.C.

"The military set me free. If I had not joined, I would have gotten bored just working in one place," the Jackson native says. "It afforded me time to travel and stay home with family. I was always very shy and introverted. It forced me to do extroverted things and get out of my comfort zone."

Lutz has often been pushed out of her comfort zone. In 2000 she was responsible for transporting wounded soldiers back home following the terrorist bombing of the USS Cole in Yemen's Aden harbor. She also was the commander of a medical unit in Saudi Arabia consisting of 2,500 people.

She met her husband, now-retired Gen. Bill Lutz, at the U.S. Air National Guard base in Flowood while they were serving together more than 25 years ago.

Last month Lutz co-hosted the Asia Pacific Nursing Conference in Hanoi, Vietnam, with leaders from 14 other countries. The conference addressed global health issues such as the H1N1 virus.

"The purpose of the conference is to gather nursing leaders from all over the world and solve global health issues," she says.

"We have a lot more in common than we have differences."

Lutz says that it has been an honor to be a role model for women, but she doesn't want to be singled out solely for her gender.

"I see women in the military treated fairly, and there is a big push on minorities," she says. "I look forward to the day when we don't have to celebrate Women's History's Month or Black History Month, and we can just treat each other accordingly. There are some hardcore prejudices, but we are getting much better and getting past a lot of that. Women have to work harder and prove themselves and carry themselves higher and stronger."

Lutz lives in Flora with her husband on 110 acres of land with their three dogs.

She will be honored Thursday during "Little Black Dress," an annual fundraiser hosted by Dress for Success Metro Jackson. She will receive a "Women of Strength" award for her impact on the community and her charitable work. Call 601-985-988 for ticket information.