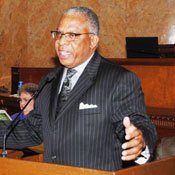 Rep. George Flaggs, D-Vicksburg, reversed his position on the possibility of consolidating HBCU this month.

"At a time when the focus must be on efficiencies and excellence, we must recognize the unsustainability of dividing our limited (Institutions of Higher Learning) funding among eight public universities," Barbour said.

The state's anticipated budget shortfalls dwarf the savings Barbour hopes consolidation will achieve, however. In his recommendation, Barbour projected an additional $200 million shortfall for the current budget year, a $715 million shortfall in 2011 and a $500 million hole for 2012. If state lawmakers managed to pass a consolidation measure in the legislative session that begins in January, it would not take effect until 2012. Barbour estimated that mergers could save the state $35 million in 2012.

Barbour's proposal would preserve each of the affected universities' campuses but consolidate programs and administrative functions. The recommendation also calls for cutting back on redundant class offerings at all eight state universities. Changes to class offerings could offer greater savings, as instructional costs comprise a far greater portion of the state's IHL budget than administration costs.

Before Barbour's September budget cuts, instruction made up 45 percent of the state's $160.6 million in 2010 spending on IHL, and academic support accounted for another 10 percent. By comparison, only 12 percent of the state's IHL spending went to administration. Another 12 percent went to operations and management, which includes things like facilities upkeep, which is unlikely to change after Barbour's proposed mergers.

Despite Barbour's support, university mergers are an unpopular proposition for many legislators, especially those looking ahead to 2011, an election year. Rep. John Horhn, D-Jackson, said that he opposed consolidation on purely pragmatic grounds.

"The larger issue is: Would it really save us any significant money?" Horhn said. "The purpose of consolidation is savings and efficiencies, and the jury's still out on those."

But opposition to mergers also comes with personal and political overtones. Supporters of the Mississippi University for Women are aware that the school, one of the state's smallest universities, is politically vulnerable because of enrollment losses and a proposed name change that has caused splits in MUW's alumnae groups.

Anghaarad Teague is president of Mississippi's First Alumnae Association, a group of MUW alumni that outgoing MUW President Claudia Limbert disaffiliated from the school in 2007. Teague expects alumni to rally together in support of the school if it is targeted for merger.

"I think there is a perceived lack of unity swirling around the W right now," Teague said. "If the Legislature takes up merger, they're going to see how unified the alumnae can be."

Merging MUW into another university would also eliminate a unique opportunity in the state, Teague argued. While MUW has admitted men since 1982, its mission still emphasizes women's leadership. At a time when women's pay still lags behind that of men, MUW's focus is essential to the state, Teague said.

History of Neglect
Supporters of the state's historically black universities make a similar argument for keeping Mississippi Valley State and Alcorn State independent. The state has long neglected its black institutions, they argue, pointing to the $503 million settlement of the Ayers case, a 1975 lawsuit brought against the state for its unequal funding of its three historically black universities. Only since 2002 has the state begun paying the settlement out.

Ivory Phillips, a Jackson Public Schools board member and professor at Jackson State University, believes that the state's black universities have not had adequate time to competeon equal footingwith other state institutions for students and prestige.

"People feel there's too many universities, but the real underlying feeling is there's too many historically black universities," Phillips said. "If you look back historically, Mississippi Valley State has not been able to offer the kind of programs that a lot of the other universities did for reasons, in terms of funding, that were racially motivated. So now you decide to merge or close it because it hasn't developed the way the others have developed. It's punishment because they were punished in the first place."

Sen. David Jordan, D-Greenwood, who is black, doubts that racism has much part in the most recent round of consolidation discussions, but he believes the combination of MVSU's historical mission and its geographic location should be reason enough for protecting it.

"We're oversensitive," Jordan said. "We've never had the resources to compete. To deprive 450,000 people in the Mississippi Delta of their own historically black university is just unfair. We have a right to exist."

Rep. George Flaggs, D-Vicksburg, launched speculation on the merger issue in an Oct. 21 speech to the Mississippi Economic Council. He said that while he sympathized with opponents of consolidation, the state's budget crisis demanded a closer look at increasing efficiency in the state's universities.

"I share my black colleagues' concerns, but that does not erase the fact that we have an obligation to make certain that we provide quality education to every student at every university at the least cost to the taxpayer," Flaggs told the Jackson Free Press.

Flaggs compared Mississippi's plight to Tennessee, which examined the possibility of restructuring its university system or merging schools during the 2009 legislative session. Tennessee has seven public universities, but its system is not entirely analogous to the one in Mississippi. Six state universities fall under the authority of the Tennessee Board of Regents, but the University of Tennessee system has its own governing Board of Trustees distinct from the Board of Regents. The two systems compete for funding, and recent reform efforts have focused on establishing a single system of governance.

Doomed Idea?
In the case of Mississippi, the cost savings from consolidation or merger are not nearly so evident, because the state's universities already share the same governing authority. Merging university administrations, while keeping their distinct campuses, could save the state some money, but it would do nothing to reduce the more substantial cost of instruction.

Like school-district consolidation, university mergers are a recurring topic of discussion, especially during budget crises. The state's IHL Board of Trustees has taken up the issue twice in the past twenty years. In 1986, after exploring a reorganization of the state's university system, the board voted to keep MUW and MVSU open. In 1994, the board received recommendations for university mergers but took no action.

Rep. Cecil Brown, D-Jackson, thinks that the Barbour's merger proposal has little chance of passing both houses of the Legislature.

"I'm all for saving money, but I don't think we've carefully thought this through," Brown said. "If we can rationalize it and say we'll get a better educational outcome for kids֖more graduates, better quality of instruction, and it doesn't cost any more money֖I'm all for it. So far I haven't heard that."

University Spending by the Numbers

Only 12 percent of Mississippi's spending on its institutions of higher learning (IHL) goes to administration.

The whole higher-educational system, nation wide, is nothing more than a glorified social club. Employers could care less where you graduated from, unless you are entering a very specified field. For the most part they just want to see that you have a degree because they have one too. It would be much more productive to shut them all down, and just do everything on-line. With all the money saved, every graduating senior in the state could be provided with a computer and an Internet connection.

Poor George, he is about as helpful to the black community as ti$$s are on a bull. If you follow his voting record and his train of thought, you will know that he is second in line to Credell Calhoun for the absolute worse voting record for things that would have benefited black communities. Earl Banks exposed him (Credell) years ago when they were opponents for his seat.

Consolidation of some K-12 school districts may make some sense and there may even be some schools that could be consolidated. But the suggestion of merging the HBCU and basically leaving the other schools untouched was an outright insult. Who is to say that MSU or Ole Miss serve a better purpose than one of the HBCUs? And if it is a matter of duplication, why isn't merging or closing one of the Big Three an option? It is not a consideration because the HBCUs and the Big Three have never been looked at or treated as equals.