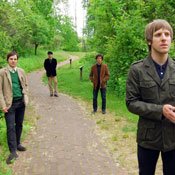 Courtesy of the Black Hollies

The Black Hollies' precise work at merging a number of iconic musical styles, from blues-influenced British rock to the cool and detached American psychedelic rockers of the mid-1960s, will convince you to trade your iPod for a record player and a stack of scratchy 45s.

The quartet from New Jersey City, N.J., has steadily accumulated praise for energetic live shows and meticulously crafted records since forming in 2004.

The band's third and latest album, "Softly Towards the Light" (Ernest Jenning Records), features all its known elements, including driving rhythms, energetic lead guitar breaks and breathy vocals. The group has also expanded the parameters of its sound on the record, crafting new types of arrangements and adding layers of instrumentation, including a variety of keyboard sounds.

Justin Angelo Morey, bass player and vocalist for the group, traces some of these changes to an organ a friend loaned him.

"We've always wanted to incorporate keyboards into our songs," he explains. "However, no one in the band could really play them." While they were beginning writing the songs for the new album, a friend of the band loaned them a Farfisa organ (the legendary quivery-sounding keyboard heard on many 1960s garage-rock records).

"I asked Jon (Gonnelli, one of the band's guitarists), 'You know a couple chords on the keyboard, right?'" Morey recalls.

The two bandmates experimented with the organ throughout the songwriting process. Once they were ready to record, the group chose a local studio with a collection of classic keyboards. These instruments (including a Hammond B-3 organ, a vibraphone, and a Mellotron, a rare, early synthesizer) are apparent throughout the record. To replicate the sound when they play live, Gonnelli switches between playing guitar and keyboard.

"Now we're not reduced to just being a guitar-based band," Morey says.

Morey's intense attachment to a group of obscure songs is another stormy influence on the album. While the Black Hollies were on tour last year, a friend gave the band members a compilation CD of 1960s soul music. Growing up, Morey's parents exposed him to soul through their Motown records collection, and he had always been a fan of the genre. However, four of the tracks on the CD, including songs by Luther Ingram (best known for "If Loving You Is Wrong, I Don't Want to be Right") and Chicago singer Darrow Fletcher drilled deep into the bass player's imagination. "They were a handful of songs I'd never heard before in my life, and I was absolutely obsessed with them," he says.

The Jersey-based station, WFMU, provides musical inspiration as well as support for the band. This hometown community radio station attracts a global audience with a unique mix of programming (including garage rock, classic soul and electronic music), and the use of a number of Web-based technologies allows listeners outside the New York metro area easy access to their programs. Morey notes that WFMU DJs (including Terre T, host of the well-regarded garage-rock show, "The Cherry Blossom Clinic") have played his band's recordings since he dropped off their first demo more than five years ago.

Feedback on the band's MySpace page and other Web sites tells Morey that the exposure through WFMU is a big boost.

"It has connected us to a lot of people that I don't think would have ever heard us otherwise," he says. "If this had been 10 or 15 years ago, we'd have had a much more difficult time getting our stuff out there."

Despite success attracting fans through the Internet, The Black Hollies still put a strong emphasis on live performances. The band is touring heavily this year to promote its new record. The schedule is filled with relatively few open dates, which sometimes results in smaller turnouts at unfamiliar venues. However, Morey and his bandmates vow to always give an energetic show, regardless of turnout.

"I've been at those shows where the band you've been dying to see is finally playing your town, but by the time they go on there are only four people in the audience, and they're clearly not happy about it," Morey says. "I would never do that to anybody."

Fill the house for the Black Hollies Thursday, Nov. 19, at the Ole Tavern on George Street. The Brooklyn-based pop quintet Bryan Scary and the Shredding Tears will open the show. For more information on the band, visit http://www.myspace.com/theblackhollies.