What I Learned from Tyler Florence 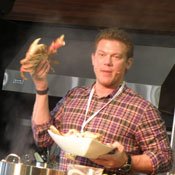 Food Network star Tyler Florence likes the stress the importance of including kids in the kitchen.

On the last day of October, with a reprieve from the rain, my son Mateo and I headed out to the Viking Classic not for golf, but to see Food Network chef Tyler Florence's cooking demonstration.

Florence has been a chef on the Food Network for 15 years and has hosted: "How to Boil Water," "Food 911" and, most recently, "Tyler's Ultimate." He's authored five cookbooks to date and owns a kitchen-supply store chain in Northern California, where he lives. He is also working on opening three new restaurants, one of which is with his business partner, Sammy Hagar.

Mateo and I watch a lot of Food Network shows. He learns culinary terminology like "whisking" and "simmering" and likes to work it into conversation whenever he can. Because he's shown an interest in cooking, Mateo helps me out in the kitchen and has taken cooking classes for the past two years or so. He even has his own green camouflage apron and chef's hat.

After arriving at the Viking Culinary tent, Mateo had his picture taken with Florence who chatted briefly with him about Halloween. Mateo then carried his autographed cookbook back to his seat and looked through every glossy page while we waited for the cooking demonstration to start.

On the menu was Cioppino, an Italian fish stew and garlic bread. As Florence prepared the stew, he shared techniques like chopping an onion and taking the leaves off a fresh sprig of thyme. Mateo was captivated. He asked me questions and commented on how wonderful everything smelled. The tent was filled with fragrant aromas of chorizo, onion, garlic and thyme.

As Florence browned the chorizo in extra-virgin olive oil, he showed us how using a food processor could make light work of creating a vegetable pulp for the stew. The pulp was mixture of celery, garlic and onions. He also showed us how to chop parsley easier by tightly rolling it up first and then chopping.

As the demonstration continued, Mateo even got up the nerve to ask Florence what he liked to cook with his son. His answer was red sauce. Florence said that it's good to let a child learn one really good dish-֖something that they can really own and master. Florence has two children, ages 2 and 1, with his wife Tolan Clark. He also has a 13-year-old son, Miles, from a previous marriage.

Aside from Mateo, quite a few kids were in the crowd. As Florence took questions, a lot of topics were kid-related. One young man asked about culinary arts school, and another boy asked when Florence knew he wanted to be a chef.

Florence said that he started cooking in the kitchen with his dad at a young age and that he attended culinary school at Johnson and Wales University's South Carolina campus, where he graduated in 1991. Johnson and Wales later awarded him an honorary doctorate in culinary arts.

During the hour Florence spent with us, he told us stories about watching his grandmother cook, adding that kids rarely see their grandparents and parents in the kitchen anymore. We spend so much time eating out, he says, that a whole generation has missed that experience.

Mateo left that day with a renewed love for cooking. Not that it had ever gone away, it just got stronger. He told his grandmother all about his book and meeting Tyler Florence. And he can't wait to prepare a recipe out of Florence's cookbook.