No Quorum At JPS Board Meeting 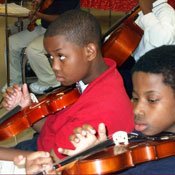 Only two board members appeared at this evening's meeting of the Jackson Public Schools Board of Trustees, not enough for a three-member quorum. Board members H. Ann Jones and Jonathan Larkin were present and listened to public comments, many of them from parents protesting the board's Oct. 20 decision to discontinue a music education program. Both Jones and Larkin favored renewing the Strings in the Schools program, which brings Mississippi Symphony Orchestra musicians into schools to perform and teach.

Absent are board members Delmer Stamps and Ivory Phillips and President Sollie Norwood. Norwood also missed the board's Oct. 20 meeting, at which a tie vote between the remaining four members failed to renew the district's 43-year-old, $300,000 music education contract with the MSO.

Phillips and Stamps voted against renewing the contract; Larkin and Jones voted in favor of renewal. Board secretary Vicki Mumford told the Jackson Free Press around 3 p.m. today that Phillips would be unable to attend the meeting due to a family emergency.

Reached by phone at 6 p.m. today, Stamps said that he had notified Superintendent Lonnie Edwards that he would be unable to attend. He did not provide a reason for his absence, however.

Many parents of children participating in the Strings in the Schools planned to speak in support of the program at the meeting. Romaine Walker, president of the Mississippi Youth Symphony Orchestra, told the Jackson Free Press earlier today that she expected an "overflow crowd" of the program's supporters for the public comment segment of the meeting.

The music program was not listed on the meeting agenda, but, with a quorum present, a majority of the board could have added the issue to the agenda and reconsidered the contract.

Does the school board need to be expanded? It seems amazing that folks could duck a meeting (if that's what happened here) and stop business from going forward.

Me thinks me smells old style good ole boy politics. Whatever it is, it stinks. How audacious for school board members to stand up hard working parents and concerned citizens who would, themselves, come in the evening after work to get answers to questions about the futures of their children. Somehow it brings to my mind that New Testament caution of Jesus that [and I paraphrase] it would be better for a millstone to be hung around one's neck and he be thrown into the sea than to harm a child. Lk 17:2.

I'm beginning to think we need an elected school board. Elected officials don't openly display that kind of contempt for their constituents, e.g. standing up parents for two consecutive scheduled board meetings without explanation after opposing a popular program. And with Phillips (I don't know about Stamps), you have somebody whose entire platform is organized around corporal punishment. I can't understand why anyone who has that kind of attitude towards kids would want to serve on the JPS board, much less end up appointed.

Tom, I actually believe that it was Norwood that first brought up the idea of corporal punishment, and then Phillips decided to champion it. The actions of this board are deplorable. Rather than face parents and explain and defend their actions, they run and hide. I expect this from third graders not grown, supposedly professional men. yuck

BTW, elected boards are no better, because it often becomes all about politics and money then. I've seen some perfectly good superintendents and board members statewide defeated because of dirty politics, slander and mud. oh well