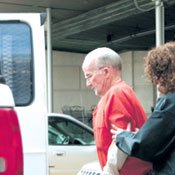 A federal appeals court has asked the U.S. Supreme Court to review the case of James Ford Seale, who was convicted in 2007 for kidnapping and conspiracy for his role in a 1964 civil-rights murder. In a request issued today, a majority of the 5th Circuit Court of Appeals asked the high court to decide whether the statute of limitations had expired when prosecutors tried Seale on charges of kidnapping two African-American teenagers, Henry Dee and Charles Moore.

In 1964, when Navy divers found the two teens' bodies in the Mississippi River, kidnapping was a capital offense punishable by death. In 1972, however, the death penalty stipulation was stripped, which made kidnapping subject to a 5-year statute of limitations.

Lawyers for Seale, a former Klansman, argued that the 1972 change applied retroactively, meaning that prosecutors had lost their chance to try Seale for kidnapping. In 2008, a three-member panel of the appeals court agreed and threw out Seale's lower-court conviction.

The full appeals court re-heard Seale's case this summer, however, and on June 5, the full court split 9-9 on the issue. The tie vote overturned the panel's decision, upholdingfor the momentSeale's conviction.

"We continue to believe that the statute of limitations in this case expired long ago," said Kathy Nester, Seale's attorney. "We are hopeful that the United States Supreme Court will resolve this important question of law once and for all."

In asking the Supreme Court to intervene, the appeals court acknowledged that the statute of limitations question could affect future prosecutions of civil-rights era crimes.

"This is an issue of first impression and national importance," the majority wrote. "The Government seeks to establish precedent for filing other criminal indictments relating to unresolved civil rights era crimes."

To Mr. Seals and his attorney, Kathy Nester, the statute of limitations in this case will expire when Henry Dee and Charles Moore are resurected from their graves and life is blown back into their bodies.