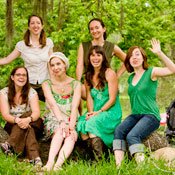 On July 19, 2008, the JFP Chick Ball was in full force when a group of lovely ladies took the stageupright bass, fiddle, guitar and ukulele in tow. For 20 minutes, they took us all to a simpler time with their down-home folk and gospel tunes. We sang along to "I'll Fly Away," and many wondered, "Who are these women, and where have they been hiding?"

Talking with bassist Valley Magee later that evening, I was surprised to learn that Chick Ball 2008 was the Hot Tamales' first live performance. They will celebrate that anniversary this year when they perform again at this year's Chick Ball Saturday night.

"Chick Ball really presented a place for us to get started," says Emily Baker, who plays ukulele and is one of the songwriters in the group.

The group first played together in 2007 during an impromptu jam session at Jack Magee's birthday bash. Magee is also a musician, playing fiddle in the Scramblers. His wife, Valley, played bass, and Julia Weems, who had just moved to Mississippi from Washington, D.C., was coming out of her shell to play guitar. Baker joined on ukulele, Melody Moody picked up a banjo, Alley Jenkins, wife of Jack's brother Matthew, played accordion and sang, and Patricia Calderon brought her fiddle.

"We just started playing old gospel tunes, and we had a blast," Weems says, "so we decided to make it official."

The group took their name from the Robert Johnson song "Hot Tamales," a song that local group The Scramblers has covered. Two of the Hot Tamales also play with The Scramblers, and at any given time in Jackson you can probably find a Hot Tamale performing somewhere. Baker performs solo; Jenkins sings and plays in Swing de Paris, Wooden Finger, St. Brigid and Alley and the Housecats; Magee performs with the Scramblers, the Dixie Nationals and Soundwagon; Weems is in St. Brigid; Moody plays with the Scramblers, and they have all sat in with one another at different times. Yes, there will be a quiz later!

Baker names Gillian Welch, Neil Young, Patty Griffin and Townes Van Zandt as some of the band's influences, and Weems adds, "We also like to throw in gospel tunes that everyone knows."

Weems and Baker agree that the decision to play Chick Ball again this year was easy: "t is an important cause, and it was fun last year.  It gives us an opportunity to work up different styles of songs." The band will play covers and originals, one of which is "Ain't Going Back."

"(It) sounds like a break-up song, but that's not really what it's about," says Baker, who penned the song. And if you want to know what it's really about, you will have to ask her yourself.

Only a half order of Hot Tamales will play this year because some of the members are doing silly things like getting married and traveling in South Africa, but rest assured the music will still be red hot. St. Brigid opens Chick Ball at 6:30 p.m., and the Hot Tamales take the stage at 7.