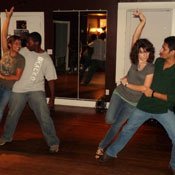 Dancers learn how to salsa at La Salsa Dance Club and Studio in Fondren.

A rich wooden floor, mirrored walls and flashy dance-club lights turn an ordinary parlor into a place of extra--ordinary possibility at La Salsa Dance Club and Studio in Fondren. Anything seems possible with the right attitude.

"One, two, three, five, six, seven," chimes Sujan Ghimire, who owns the club and studio with his wife, Sarah. The music is quick, and the steps are impossible to follow. While the male leads and with his left foot back and right foot forward, his female partner does the opposite. Ghimire interrupts the count with a burst of encouragement. "That's it!" he shouts to a pretty young woman who has mastered the dance combination in her nail-thin stiletto sandals.

Lithe and fit, light-footed and assured, Ghimire looks like he could dance his way into stardom on the popular reality show "Dancing with the Stars." Ghimire has been a professional dancer since his teens, and the success of La Salsa Dance Club and Studio (also known as Salsa Mississippi) is part of his extraordinary journey from Kathmandu, Nepal, to Jackson.

As the tempo gets faster, Ghimire's shout-outs get shorter: "One. Five. One. Five." Within minutes, the dance students glisten with a salty glow of their energetic dance moves.

Salsaor salsaaaaa as it should be said (and loudly, too)means "sauce" in Spanish. The word has become associated with a style of music and dance with a racy uptempo and a sexy, spicy attitude. Cuban in origin, but culturally adaptable, the salsa dance movement started simmering in the United States in the 1950s and got really hot by the mid-1970s.

"It is hard to put into words how to salsa," Sarah Ghimire says. "Dancing is visual. Without seeing the steps and without the music, you're only getting half the dance." She describes salsa as "energetic and smooth." Execution and a sassy attitude make the dance. "It's about celebrating that relationship with your partner and completing each other with your dance."

Salsa dancing became part of Ghimire's life. "Since I was 7 years old, my mom put me in a (Nepali) dance school. She always wanted to have one kid in that profession," Ghimire says.

Ghimire spent the next 11 years perfecting his Nepali dance moves and teaching it to others. "Nepali dancing is very close to the Bollywood dancing that you see in Indian movies," he explains.

When he was 18, Ghimire competed in a national Nepali dance competition.

"We don't have it anymore, but back then, we use to have a king in Nepal who loved art, music, painting and dancing, and from his own funds, he gave a scholarship for each category," he says. The competition organizers held auditions in every corner of Nepal and then selected 500 artists to perform in Katmandu. Ghimire made the cut.

"We had a very respected judge who was like Simon Cowell on 'American Idol'," Ghimire says. After Ghimire's performance, the judge "made a very rude comment," which Ghimire refused to share, finding it too embarrassing to relive. That misguided judge eliminated Ghimire from further competition.

"I went out of the competition with a broken heart.  I was so sad and frustrated," Ghimire says. That frustration led to a new opportunity. "One of my students introduced me to this Salsa dancer, Diego Saenz."

Saenz, who was from Equador, opened the first salsa studio in Nepal: "He told me 'I'll teach you how to teach, and when I'm gone, you can take over my studio.'"

"Nepal is a very conservative country. You never hold a woman's hand in public, and now there is a foreigner teaching dancing holding a woman's hand."

Saenz and his dancers, however, made cultural inroads after performing the salsa at the Miss Nepal beauty pageant, which was televised for 30 million viewers.

"We had a great response from people. They didn't understand a man leading a woman, but what they saw was a beautiful dance," Ghimire says.

The Perfect Partner
Ghimire met his perfect partner in Kathmandu. She was a gorgeous Mississippi woman from Brandon on a mission trip to Nepal for the Christ For The World Ministries, which performs its missionary works around the world.

"My roommate and I wanted to learn more about the culture so we took traditional Nepali dancing," Sarah Ghimire says. Sujan Ghimire taught that class and after he transitioned to Salsa, he called and asked her to try it out. It wasn't long after they first danced the salsa that Ghimire proposed. They had an American wedding in Nepal in 2005.

For the next year, salsa simmered on the back burner for the Ghimires. He transferred the salsa studio to another instructor, and it continues to thrive today as the only official salsa dance studio in Nepal. The newlyweds headed to Folkstone in England, where Ghimire trained in Christian ministry, and his wife received training to teach English to foreign students at Cambridge University.

Ghimire started teaching salsa on the side, but unexpectedly the business grew and became profitable. In early 2009, the Ghimires opened Salsa Mississippi at 303 Mitchell Ave. in the Fondren neighborhood of Jackson.

"We started with three students in our first class," Sarah Ghimire says. The numbers of students dramatically increased as a result of the popular television show "Dancing with the Stars." The classes do more than teach dance.

"It's a great place to socialize and get a good work out and do something worth while," says Himanshu Dave of Brandon, who has been taking salsa lessons the past two years. "I was extremely dancing challenged, and I decided to take the bull by the horn. Once I got there it was an amazing experience."

The crowds gather for Salsa Mississippi's dance parties, held on Saturday nights at the studio and once a month on the rooftop of Fondren Corner. Cost is $10 with a free lesson beforehand. "We get 80 to 100 people at these parties," Sarah Ghimire says. "The focus of the evening is dancing. It's a great way to meet new people, and it's a safe place for people to have fun."

This is a great read. I would really like to read more about Sarah and Sujan's relationship as it began and formed. Everything I've heard about Salsa Mississippi intrigues me more and more. One day I will find the courage to tap my inner salsa dancer. Thanks Anita!