How to Remake a Neighborhood | Jackson Free Press | Jackson, MS

How to Remake a Neighborhood 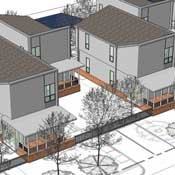 Affordable housing is not a typical prestige project for architecture firms. A new development in Jackson's North Midtown neighborhood may dispel that notion, though, applying innovative design on a relatively humble scale.

Jackson-based Duvall Decker Architects has built a reputation constructing public buildings like schools and museums, including the Mississippi Library Commission building. At the behest of the Jackson Housing Authority, Duvall Decker has designed a series of affordable residential developments for three different neighborhood between Millsaps College and Mill Street, scheduled to break ground in early 2010.

"For those of us who have worked in the affordable housing industry for a long time, when we look back at what we (HUD) built, it wasn't very livable," Jackson said. "The Housing Authority's not going to come back anytime soon with high-rise, multi-family, large-scale apartment complexes."

In 2005 and 2007, after re-evaluating its housing stock, the JHA demolished two of its largest projects, the White Rock and Willow Grove apartment complexes, which were in sub-standard condition.

"These were 1970s developments that were poorly built when they were constructed and were typical townhouse-style, isolated enclaves of housingremoved from neighborhoods, fenced in," architect Roy Decker, principal of Duvall Decker, said.

For new development, JHA wanted to create housing that would add value to the surrounding neighborhood. The plans that Decker's firm devised balance the amenities of single-family housing, like carports and private yards, with that desire to foster community in the struggling neighborhood.

Working with a relatively small footprint for each house, Duvall Decker devoted more space in its design to communal living activities and less to private bedrooms. The plans also stagger houses, creating courtyards in the space between units closer to the street and those set further back.

Duvall Decker's design gives each house its own carport, accessible through a private alley. On top of the carport is one of the development's most innovative features, a set of solar panels that could generate enough electricity to reduce each household's energy bill by up to 25 percent. As a donation, Entergy Mississippi is equipping each of the units with a smart meter to measure the residents' energy usage and identify inefficiencies.

Demolition on the three development sites has already begun and should be finished by March 2010, Jackson said. She expects the JHA to begin advertising the development for resident applicants in February. The JHA will develop a waiting list of residents based on a set of eligibility criteria, including credit history, employment and a background check.

"We want a diverse communityracially, income-wise, whether they're elderly, disabled or young families," Jackson said. "We want to create a community."

Construction likely will begin by June 2010 and take nine months to one year.

In addition to the roughly 22 residential units in Midtown, the JHA is also planning a four-unit commercial project at the intersection of Fortification Street and Joseph Court. The building will probably house office space and a clinic, Jackson said. Total costs for the combined residential and commercial project will be between $4 million and $5 million, Jackson estimates, while construction costs for each residential unit will be about $132,000.

JHA is cobbling together funds for the project from a variety of sources, including the federal stimulus package, the Department of Housing and Urban Development, private foundations, and the JHA's own coffers.

The Housing Authority selected North Midtown in part because the area is already home to 12 other JHA units, but Jackson also hopes to use affordable housing to stabilize the neighborhood. North Midtown has lost nearly 26 percent of its population in the last nine years, Decker said.

Decker's firm is also employed in developing a neighborhood master plan for the North Midtown Community Development Corp. The plan calls for improving current homes in the area and attracting new residents with a range of housing, from affordable developments like the JHA's houses to condominiums and town houses for students and professionals. It also calls for more coordination between the social-service agencies working in the area and for features devoted to health, like bike paths and playground equipment.

Marcie Skelton is director of the Walker Foundation, which has funded education initiatives in the neighborhood for more than 10 years and is helping fund the master-plan process. She believes that the master plan is a step in the right  direction.

"It gives both supporters and residents a clearer view of what their roles are and how to support each other," Skelton said. "I'm so pleased with the high expectations for the plan. Depressed areas will sometimes sell out for a lower standard, and they don't need to."

I like the layout. The density, sidewalks, and front porches should promote community. I hope they're planning on making it a mixed-use development as well, with grocery stores and other services within walking distance. When people can walk places, they tend to run into each other more on the street, and you get even more community.

Also, the layout reminds me of my grandfather. In the 1920s he built his house at the back of a Chicago lot, on a street where every other house was at the front of the lot. He did this to get more light, just like the planners here have in mind.

Mark, Great comments. Did your grandfather eventually have to build a fence to keep his neighbors kids and the general public, off his yard to protect his privacy and landscaping? Or was the sense of community and respect for the property of others, strong enough for his neighbors to respect his yard, landscaping and privacy? Ward, I've seen this scenario in many Queens and Brooklyn New York neighborhoods when an existing house was burned out and either a low chainlink or high wooden fence was soon constructed to control access to the often attractive, and privately owned space. Even though the front and rear yard setback requirements are rather stringent in New York, to promote standardization of yards and simplify understandings of property lines, these new fill-in residences were often built smaller in order to create the larger front and rear yards. Basements (very, very common in New York) were expanded under the front, and rear yards, to maintain the total residence floor space. As the JHA properties will probably be rentals, I am assuming the JHA will maintain the "shared front yards". In my experience with public housing, housing authorities do only the bare minimum in landscaping design and maintainance. When money gets tight, landscape maintainence is the first item to be cut. As a result "common spaces", while in a privately owned or senior citizen public housing context, are often well maintained by the residents, common spaces easily accessible to the entrances and exists of multifamily (lots of under supervised kids) rental housing units are often barren wastelands. I wonder of the JHA and their archtitects have considered this challenge in their respective maintainance budgeting and landscaping materials development and selection processes?

I think my grandfather's house always had a fence in the front yard, but I think everyone's did. In Philly where I live, it's been found that if they put a simple wooden rail fence in front of a vacant lot, people start treating it like someone owns it, and they stop throwing trash in it. It's amazing what a fence can do. I hope all of the new houses in the new development won't be rentals. The Philadelphia Housing Authority has started including a certain number of owner-occupied homes in all new public housing developments. This seems to have had a good effect, as the first developments of this kind are still looking really nice after over ten years.

Ledger story today on this; glad they got around to it.

Ah yes. Revitalization! Makeover! Improvement! Or is it just an attempt to fool people that there are not really projects, since the same neighborhoods are currently prime property for gentrification? Maybe if they don't look like the pork & beans (liberty square in miami), like marcy in bed-stuy, or like cabrini-green, then the rich white folk will still buy up the rest of the property, jack up prices, and kick black folk out of their homes? I get it. Make a couple nice projects to keep some color in the neighborhood. It doesn't feel like the city without some negroes to make it urban. I shall name it "Justified Gentrification or: how I learned to stop feeling guilty and kick out the negroes."

Pretty sure Jackson doesn't have to worry about that.

We do have to worry about gentrification, QB. Increasingly. Especially in residential neighborhoods like Midtown, in addition to neighborhoods circling and bordering areas like downtown and Farish Street entertainment strip.

That Guy: How would you like this housing development to be carried out differently? Everyone: Gentrification is one of those things that's tough because it's a bad thing to drive long time residents out of their homes, but at the same time, a city of only poor people has no tax base. We need wealthier people in the city so they can pay taxes that support the services the city has to provide. It's been shown that there are many benefits to having mixed-income neighborhoods. The challenge is to bring in more affluent residents while not driving out poorer ones. That's really hard to accomplish because location usually dictates real estate prices. Here in Philly we have a relatively new "inclusionary housing law" that mandates 10% of housing units in any new development be affordable housing. It's still a new policy, so it's too early to tell how well it works or not.