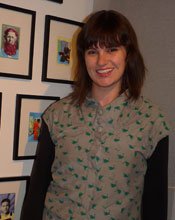 When Robin Jayne Henderson, 27, leaves her day job as the gallery director of One Blu Wall in Fondren Corner, she heads home to One to One Studios and either picks up her paintbrush, or joins in with whatever event is happening on the floor below.

Henderson, a Jackson native, lives and works at One to One Studios, a non-profit in the Millsaps Art District that provides low-rent studio space for artists, a commission-free gallery, and hosts a diverse mix of events including concerts, dance performances and community meetings.

Since she moved into One to One a few months ago, Henderson says she's had a surge in creativity.

"I've been working a lot. You're surrounded by all these wonderful artists; you see people working all the time, and you're like, 'I want to work,'" she says. " ... I love it. They are like my family."

"I like to take things that people would throw away and not look at, and make people see them in a different way," she says.

"That's what happened with the bottlesI ran out of things to paint on, and I drank a ton of root beer, so I thought 'why not paint on these bottles?'"

Using a matte medium, Henderson transfers copies of old black and white photos of her relatives onto the bottles and canvases, which are currently displayed at One Blu Wall.

"It's been a way for me to connect with my family," she says.

Before receiving a fine arts degree from the University of Mississippi in 2007, Henderson spent a brief stint in New Orleans, leaving a few months before Hurricane Katrina.

She grew up in Jackson, and has witnessed the evolution of the art community.

"There are so many local people with great local businesses that are providing services, entertainment and culture for Jackson that we haven't always had," she says. "Downtown and Fondren are really coming alive."

In addition to her art, Henderson spends most Sundays year round as a crewmember for sailboat races at the Jackson Yacht Club.

In the future, Henderson plans to pursue a master's degree in fine art with a specialization in printmaking.

"For now I'm working on learning and just improving my craft," she says. "Each year, I set goals for myself as well as lifetime goals I want to achieve as a artist."

Robin is one of those people who, if you cross paths with her, WILL make you smile no matter what kind of mood you're in. :o) And her work is fantastic—I particularly like the bottle art.

growing up, Robin was like a big sister to me. love her work and the progress she's made!