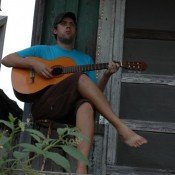 With the Tuesday release of "Sing your Song," musician Johnny Bertram dished out a seven-song prelude to a full-length album scheduled to debut later this year.

Bertram, 28, a West Coast transplant and Boise, Idaho native, arrived in Jackson in 2005, and was formerly the leader of the indie synth-band Synthar. He was ready to move back to Portland when he found his niche in the local arts community, not just through his music but also in One to One Studios, the not-for-profit arts collective he helped start at 121 Millsaps Avenue.

One to One features an art gallery and performance space for live acts, and provides space for a number of artists to live and produce their work. The collective holds regular, free art exhibitions and music shows, and is supported by the artists and donations from patrons.

It's a fine EP and worth noting that it's on local Jackson label Esperanza Plantation, known for bands like Colour Revolt, Wooden Finger, and the Weeks.