Where in the World Does Redondo Beat? | Jackson Free Press | Jackson, MS

Where in the World Does Redondo Beat? 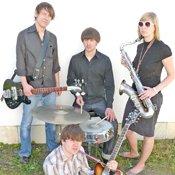 Redondo Beat can be difficult to pinpoint on your musical atlas. The group's name might remind you of a popular beach town in California. Their music, a seamless amalgam of garage rock and classic pop, hearkens back to 1960s Memphis or Detroit. But the group actually comes from a small village in central Germany.

Guitarist and singer Roman Aul (pronounced "owl") formed Redondo Beat 10 years ago in his hometown of Freigericht, Germany, located 25 miles outside Frankfurt. Aul is an obsessive fan of American rock and soul music from the 1960s and '70s, and he brings together many elements of this music into his original songs. The group's most recent album, 2007's "When the Day Turns into Night," showcases the guitarist's ability to bring multiple aspects of his favorite music together and create something new. The album includes hints of the early '60s girl group sound, gritty garage rock and the strong melodic hooks reminiscent of early '70s groups like Big Star.

While the group is working to get a record label in the U.S. to release their records here, they have already garnered many American fans. Among them is Scott Rogers, a veteran Memphis musician who first saw Redondo Beat while on tour in Europe with his previous band, the Cool Jerks. Rogers remembers that his "jaw dropped" when he first saw them play and immediately became a fan. He's especially impressed with Aul's songwriting abilities.

"Roman writes all of his songs in English, which is a second language to him," Rogers notes. "And he's a better songwriter than most people I know who speak English as a native language."

Aul's focus on writing in English came from his constant exposure to 1960s American rock and soul while he was growing up.

"My father's favorite musician was Otis Redding," he says. "He also had CCR records and stuff on Stax."

As a teenager, he became interested in punk rock and later joined the punk band Mucus 2 as a drummer. Redondo Beat (originally his stage name with Mucus 2) started as a side project, with Aul making solo recordings in a home studio and pressing singles that he sold at Mucus 2 shows. He later brought in other musicians to play with him, and Redondo Beat quickly took to the road. "Our first gig was in Frankfurt, the second one was at my father's second wedding, and the third one was a festival in Barcelona," Aul recalls. "And then we went on tour right away with a band from Sweden."

Several musicians have come and gone from Redondo Beat since the group's inception, but the band's current lineup has been playing together for a couple of years. Besides Aul, the group also includes his younger brother Maximilian Schneider on drums, Katrin-Marleen Einert on backing vocals and saxophone and Frank Reinfurt on bass. The band has gotten the chance to play with some of their heroes from the 1960s garage-band scene.

Last fall they served as the opening act and backing band for Sky Saxon, the legendary frontman for the '60s garage group the Seeds (best known for their hit "Pushin' too Hard") on a European tour.

"It was great for us because a lot of people came out to see Sky Saxon," Aul says.

Despite the distance between their home and Mississippi, the group has maintained close ties to musicians in the area. Redondo Beat has played in Jackson and Oxford on past tours, and they have also toured Europe with Oxford mainstays the Preacher's Kids ("A party every night," Aul remembers).

While putting together their upcoming U.S. tour, the group made sure to book as many shows in the region as they could. "We like the South a lot. ... We like the mentality," Aul says. "And the roots of rock ‘n' roll are here."

Those roots are a powerful attraction for the band. They begin their upcoming tour in New Orleans, where they will play a show, but more importantly for the band members, attend the Ponderosa Stomp, the now-legendary music festival that features many overlooked rhythm and blues musicians from the 1950s and '60s, like harmonica player and singer Lazy Lester.

"It's heaven for us to come to the States and hear those great bands," Aul says.

The second stop of Redondo Beat's U.S. tour will be in Jackson, with a performance at Martin's Lounge on Thursday, April 30. Local favorites Los Buddies will open the show. For more information, call 601-354-9712. To hear samples from Redondo Beat's latest CD, visit http://www.myspace.com/redondobeat.