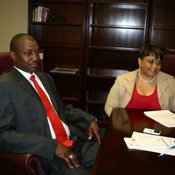 Fish & Fisher owners Renna Fisher and Jackie Williams say they deserved a shot at a $49 million contract with Toyota.

A Jackson-based contractor is suing Gov. Haley Barbour, the Mississippi Development Authority and Toyota for denying it the opportunity to bid on a lucrative contract for the $1.2 billion Toyota Prius plant in Blue Springs. In a lawsuit filed March 25, Fish & Fisher Inc., a black-owned business, alleges that Toyota, along with government officials, only solicited bids for a $49 million site preparation contract from five white prime contractors, unfairly excluding minority-owned businesses.

"They jumped through all the hoops and did everything that Toyota told them they had to do to qualify," Fish & Fisher's attorney Byron Perkins said.

As instructed by Toyota, Fish & Fisher owners Renna Fisher and Jackie Williams qualified their business as a general contractor through the National Minority Supplier Development Council, Perkins said. They were prepared to bid on the site preparation contract but never got the chance.

Rather than review bids from any interested company Toyota invites bids from licensed contractors who meet certain requirements, explained Toyota spokeswoman Barbara McDaniel. Contractors must have prior experience with large-scale automotive projects and annual revenue four times the amount of the Toyota project.

"That's done to protect the contractor. We run a very lean operation, and we don't want any one company to have Toyota as its one and only project or even its biggest source of revenue," McDaniel said.

McDaniel called Fish & Fisher's discrimination claims "truly baseless." While Toyota does not specifically seek out minority businesses for prime contracts, it is currently exceeding its goal of spending 15 percent of total expenses for the plant with minority businesses, McDaniel said. Few businesses in any state are large enough to qualify for Toyota's prime contracts, McDaniel said, and Toyota tries to establish relationships with smaller contractors like Fish & Fisher through its subcontracts.

In May 2007, when Toyota awarded the site preparation contract to two white-owned DeSoto County companies, M&H Construction and L&T Construction, it also awarded a $6 million subcontract to Fish & Fisher for a dirt-moving component.

Fisher and Williams allege that M&H and L&T underbid the project by $18 million and estimate that the prime contract would have netted them $20 million.

"They ended up doing the same work that they were denied as a general contractor for $14 million less," Perkins said.

Perkins said that he could not share specific evidence of state officials' involvement in the bidding process, yet, because he had not begun discovery.

McDaniel says that Fish & Fisher's complaint against Toyota only surfaced after L&T stopped paying for its subcontract work. Fisher and Williams have filed a separate lawsuit against L&T. L&T owner Levy Harris did not return calls for comment.

"Fish & Fisher—when they were awarded the contract with L&T—expressed great pleasure in having that contract," McDaniel said. "Not until this relationship soured with L&T did this come to light."