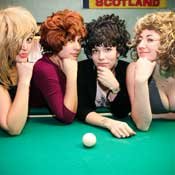 The Bachelorettes will perform April 2 at One Blu Wall during Arts, Eats and Beats. For more info, visit http://www.thebachelorettes.com.

The Bachelorettes began a recent rehearsal with something akin to a business meeting, laughing their way through an attempt to schedule recording sessions and prepare for upcoming shows. Despite coming off a long day at work, the four had unwavering energy devoted to planning out their musical adventures.

Beginning with bassist Annie Blazer's pre-written lyrics, the women soon turned their attention to creating a new song, What followed was an endearing process of finding appropriate rhyme schemes as they sat around Blazer's dining room table.

"What else rhymes with train?" Rachel Jarman, vocalist and feisty front woman, asked the others.

Guitarist Lizzie Wright and drummer Amanda Rainey wanted to make sure the story was clear—the story of two people meeting on a train between Jackson and New Orleans. Romantic notions swirled about kisses and slight touches as the women each had ideas about how two people might show their affection and wonder for each other after meeting in such a way.

As the song solidified before them, the ladies grinned, singing along with each other to their new creation.

Influenced by girl groups like The Chiffons and The Dixie Cups, The Bachelorettes came together in October 2008. Taking cues from the styles of the '60s girl groups, The Bachelorettes appear in brightly colored dresses and wigs. Their fans show up be-wigged as well, which the band members encourage, even bringing extra funky wigs to the shows in case someone wants to join in on the fun.

The wigs, which contribute to the women's signature look, came from Blazer's fascination (and subsequent collection) of wigs, which the rest of the band adopted. Blazer, who moved to Jackson from North Carolina last summer, eventually met the other three members through mutual friends and random run-ins, and the foursome decided to make their girl group dreams happen.

The Bachelorettes are individually talented musicians and songwriters, but have little experience in bands. It is in their collaborative songwriting process that the fun shines. As a band, they have created 10.75 songs (apparently, they perform a half-song and a quarter-song, but you'll just have to come to the shows to find out) of sugary pop songs and perform three covers. The performances are full of ridiculous and infectious energy with Jarman's constant bouncing and dancing about. The women have great stage chemistry with each other, filling the time between songs with banter about their outfits and upcoming songs.

The band members agree that their song "Goy Toy" is the fan favorite, a hilarious song about a Jewish girl moving to Mississippi under the stern warning of her mother that she won't find any Jewish boys. Jarman sings, "Not a Jew/I shouldn't even be talkin' to you." One highlight of the show is Jarman's sly grin as she introduces the song: "There's just one boy in particular who I'm aching to give my heart to." And it turns out her mother was right after all—he's not a Jew.

Another fan—and band—favorite is "Missing You in Mississippi," which features the ladies spelling out Mississippi in a delicious four-part harmony and a saucy guitar.

In addition to performing shows with other bands, The Bachelorettes record the weekly music calendar for Daniel Guaqueta's "Mississippi Happening" on WLEZ. In April, the ladies will head into the recording studio to record their first album. Before that, however, they will cut one track for a music video.

They also have an interesting and curious project in motion along with other Jackson songwriters. What started as a joking reference to a friend's date became the Special Passenger Project. The Bachelorettes are working on their own tune for the project, which is quickly becoming an EP of local singers and songwriters—including Chris Wheeler, Passenger Jones, Ape Champ, and Josh Hailey and Nicole Marquez—working together on songs about significant others. As with all of their songs, the ladies are sweet storytellers devoted to entertaining their audience.