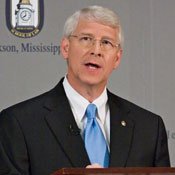 Ronnie Musgrove
Musgrove displayed a commitment to expanding health insurance coverage as governor. In 2000, Musgrove signed a bill to expand eligibility for the State Children's Health Insurance Program (SCHIP). That bill also called for a community-outreach campaign aimed at publicizing the program. As a result, the number of Mississippi children enrolled in SCHIP rose from 562 to more than 62,000 during Musgrove's administration. In keeping with his campaign's stance against special interests, Musgrove is especially critical of the costly Medicare Part D prescription drug benefit. The program, which pharmaceutical industry lobbyists heavily supported, does not allow the federal government to negotiate prices with drug companies, as most federal agencies do with other programs.

Roger Wicker
As a congressman and interim senator, Wicker has a reliably conservative record on health care, favoring what he calls "patient-focused reforms" and opposing increases to any government role in health care. Wicker voted in 1997 to create SCHIP, but voted against expanding SCHIP eligibility to 2 million to 4 million more children in October 2007. In fact, the first bill Wicker introduced in the Senate, the Making Health Care More Affordable Act, proposes many of the changes found in John McCain's health care plan. Wicker's legislation, which has been referred to committee, would expand health savings accounts, allow individuals and families to purchase health care across state lines, cap non-economic damages on medical malpractice lawsuits and provide taxpayers with a $2,500 tax credit to purchase health care.

Thad Cochran
Like Wicker and his fellow Republicans, Cochran voted against expanding SCHIP eligibility in 2007, on the grounds that it would move privately insured children into government coverage. Like Wicker, he has shown his support for tort reform, voting in May 2007 to cap awards in medical liability lawsuits at $250,000. In 2005, Cochran co-sponsored a bill that provided federal funding for state high-risk insurance pools.

Erik Fleming
Like Wicker and McCain, Fleming supports expanding eligibility for health savings accounts, which provide a tax-free way to save for medical expenses. Fleming does not advocate a single-payer health-care system, as he believes that cooperation with the health-care industry can sufficiently reduce costs.