'Hands Off' Music from the Ether 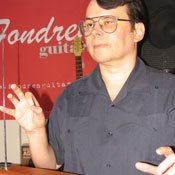 Every Saturday afternoon, unusual music fills Fondren Guitars. In addition to the sounds of people trying out guitars, there's a distinctive electronic melody reverberating through the store. Standing in the corner of the shop is the creator of the unique sound: Thomas Grillo holds his hands over a small wooden box with two antennas sticking out of it. Without touching the device, he makes slight gestures with his hands, and an eerie, almost voice-like sound spills out. Grillo is playing a theremin, one of the most unique electronic instruments.

The theremin is one of the few musical instruments that produces sound without being touched. Players control the pitch and volume by moving their hands toward and away from its antennas, emitting a futuristic sound.

Theremins are one of the earliest electronic instruments. Invented in 1919 by Russian physicist Léon Theremin, the early performers (or "thereminists," as they're called) played classical music on the instrument. By the 1950s, the theremin took the lead on the soundtracks of many science fiction films. In recent decades, rock and experimental musicians have embraced it as well.

Thomas Grillo came upon the theremin accidentally while searching online. He was intrigued by the instrument, " ... so I went ahead and bought one, just on a whim ... thinking it would collect dust after a couple of months," he says. Instead, he became captivated and has spent countless hours over the past two years mastering the instrument.

Music has always been an important part of Grillo's life. While growing up in Biloxi, he studied classical violin and flute. He moved to Jackson in the early 1980s and became active as a singer with a number of local choral groups. The theremin opened new musical possibilities for him.

"There was a long time when I was in kind of a rut, artistically," he says. "It wasn't until I got my hands on a theremin and started really getting creative with it and said (to myself), 'I can get back into music now.'"

Grillo was eager to learn the instrument, but there was not a local expert to help him out. "You almost have to teach yourself to play," he says. Grillo started out with some instructional videos, but soon found Theremin World, an Internet gathering place for theremin enthusiasts from around the globe. "It's really a close-knit group of people," he said. The Web site introduced him to many veteran thereminists who shared their techniques.

After practicing for a year, Grillo was eager to share his music with others. He made use of another Web site, YouTube, to establish himself as a performer and instructor. Grillo began by posting short videos of himself performing classical pieces (his specialty area), but he really began to attract attention when he uploaded a series of theremin instructional videos.

A little over a year ago, Grillo put together four videos in which he demonstrates how to play the theremin and posted them on YouTube. The series has been popular, with the first segment viewed over 300,000 times. Grillo has also received many questions through the comments sections for the videos and has patiently answered each one.

"It's a teaching opportunity," he says. "If someone asks a question ... that's my cue to become the instructor."

The success of the videos has also resulted in requests for lessons. Grillo currently has two long-distance students, one in England and the other in Colorado. He uses his Webcam to conduct the lessons, demonstrating the precise movements he uses to coax music out of the instrument.

The musician has recently expanded his work into film music. Over the past year, he recorded theremin tracks for "Golgotha," an independently produced film by an Atlanta-based filmmaker, which tells the story of an aged sorceress. Grillo's theremin is heard throughout.

Grillo is also working to build awareness of the theremin in Jackson. His primary venue is Fondren Guitars, where he demonstrates the instrument on Saturday afternoons. Most of the visitors to the store enjoy his music, but there are occasional skeptics.

"I've had someone accuse me of humming," he says. "If I can make a theremin sound like someone singing, then my job is done."

Thomas Grillo demonstrates the theremin on Saturdays from 1 to 3 p.m. at Fondren Guitars. Call 601-362-0313 for more details. Find information on Grillo's instructional videos and other projects at http://www.thomasgrillo.com.