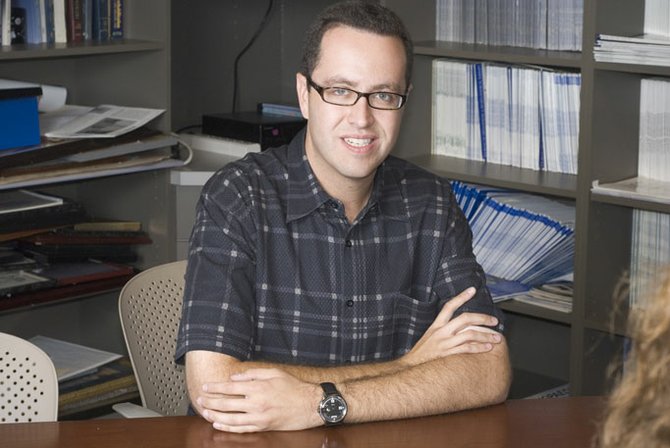 Eight years ago, Indiana University student Jared Fogle became an instant celebrity when he appeared in a series of television commercials for Subway restaurants. After losing 245 pounds by eating Subway twice a day and exercising, Fogle stood before viewers and showed them the now-famous pants he wore when he weighed 425 pounds before the diet.

Commonly known as "the Subway guy" these days, 31-year-old Fogle has continued work as a Subway spokesman, and two years ago, he started the Jared Foundation, a non-profit dedicated to fighting childhood obesity and teaching kids healthy eating habits and the importance of physical activity. Oct. 23, Fogle took time from his Jackson stop on the Tour De Pants to talk to the Jackson Free Press.

So, what inspired you to lose weight?
I think I was just fed up with myself. I was sick of my life, sick of the way I had become and sick of what I did to myself more than anything. I think it was a combination of a lack of mobility that I created for myself, coupled with having a health conditionsleep apnea, which had really come on strong. Enough was enough, and I said, "Alright, I gotta do something." But it was hard to find something that worked. I tried everything, and I kept failing and failing and failing. I kept working at it though, and sure enough, I stumbled upon Subway my junior year of college andit was one of those crazy college ideas I hadI tried eating it twice a day, and sure enough it worked. Luckily, I was able to stick to it for almost that whole year, and I ended up losing a lot.

Were you overweight as a child?
Yeah, from about third or fourth grade on. This was a slow, steady gain. Every year I gained faster and faster. I was gaining more and more weight every year.

Do you tell that to the kids you meet today?
Oh, yeah. There are way too many video games, too much Internet access and TV-watching. It's that sedentary lifestyle, eating more and more food. For me, it was almost an addictionthe junk food, the fried food. It took more and more to fill me up. If I wasn't full, I didn't think I was happy. That was the tough part.

So let's talk about your foundation, The Jared Foundation. What is it?
I started it a couple years ago, and it's been growing slowly but surely. Not-for-profit groups are never easy to start, but it was just a way to take it to the next level on what I'm doing now, and take that message to fight child obesity. I realized there was nothing really out there specifically aimed just at child obesity, and I'm in a very unique position people know me, kids know meand I'm just trying to make the most of that, I suppose, and really do something with it.

What food do you miss eating the most?
That's the thing. I don't miss foodI can still eat it, I just don't eat the quantity. If I wanted that pound cake (pointing to the counter of the hospital break room), I'd have a little bit of it, but I wouldn't eat the whole thing anymore. Moderation! We've lost that in our country. We're all about buffets; we're all about "supersizingԗthat's the biggest part of it. People can eat pretty much what they want, just not the quantity they used to eat.

What challenges did you face while trying to lose weight?
Keeping at it, mentally staying on top of it, saying, "This is what I'm gonna do." In a way, it was a no-brainer: I knew what I was going to eat every day; I knew it tasted good. That was easy. But staying with it and not giving in to temptations I guess, more than anything.

Is that your advice for people who think they can't lose weight?
You gotta want it. You gotta realize it's going to be a sacrifice; especially at first. You gotta let your body adjust. As Americans, we want to have our cake and eat it, too, but to lose weight, you've gotta sacrifice, and you've gotta be willing to do that. It really takes a special kind of commitment. That's why it's so hard to lose weight and keep it offand keeping it off is a whole other story.