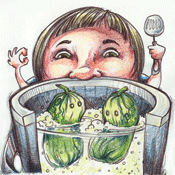 I am a very strong-willed protester of fried foods. I pull breading off chicken, refuse to eat fried okra and think chicken fried steak is almost sacrilegious. Living in the South, I realize that many people around me do not share my viewpoint. However, I do have one exception to my rule: fried pickles.

I tried them on a first date when my soon-to-be-boyfriend took me to Scrooges, one of Jackson's local restaurant legends. I was shy and nervous, so I didn't let on about my aversion to fried foods when he ordered the fried pickles.

They came out piled high in a greasy paper-filled basket, slices of dill pickles crusted in breading with a side of ranch dressing. I tentatively dipped a pickle in the sauce. First chew: delicious. I loved them. Since I didn't want my date to think I was a pig, I only ate half the basket and let him eat the rest.

Since then, I have let fried pickles be my guilty little pleasure.

I've even thought about making them myself, but because I don't eat fried foods, I never cook them. More than once, I have opened the top cupboard, and stared at my husband's little fryer (all good southern boys have a fryer), but just haven't had the courage to reach up and pull it down.

Actually, that little fryer has quite a conspicuous history. When my husband and I first moved in together, he introduced me to the fryer. I would watch, mystified as he heated the oil and dropped in crab cakes, chicken tenders and French fries. He even had the slotted spoon to scoop the cooked fried foods out of the hot oil and onto a paper towel. Instead of getting enthusiastic about the fryer, I lectured my husband on the health hazards of re-using oil. I told him his arteries were closing up. Nothing even worked. The chicken tenders kept coming.

Another time, a good friend of ours was searching for a pot in our kitchen. She opened a high cupboard, saw the fryer sitting up there, and reached up to pull it down. What she didn't know was that it was filled with old oil (I told my husband it was dangerous!). We called her French fry for the rest of the day.

It wasn't until we moved to Memphis that the fryer finally left the scene. Subconsciously, I planned perfectly. The fryer got unpacked at our new place and stashed in the cupboard above the refrigerator (which no one ever uses anyway). In the insanity of starting a new job and adjusting to a new city, the fryer was forgotten, left in the cupboard above the fridge. Now, my husband is going to the gym regularly and prefers to grill his food.

But then I started toying with the idea of pulling out the old fryer for a run. I started to crave fried pickles, and couldn't find them anywhere in town. I thought about trying to find a recipe, but my inexperience in the area of fried foods made me hesitant to try a brand new, unknown recipe.

Then, we had some friends visit from Jackson for a weekend of tennis-watching and playing. Somehow, fried pickles came up, and one of the women mentioned how easy it was to make them. "You just make pancake batter, dip some sliced dill pickles in it, and fry them up," she said.

I didn't believe her. It sounded too simple. Surely my dirty little secret would be harder to create than that.

Because I need to keep up my image as an anti-fried foods advocate, I wanted to wait until my husband was out of the house, but I decided I might need a lesson on how to run the fryer.

So, here it is: the simple but naughty recipe for fried pickles. Be careful. They have the tendency to make you dive headfirst into that pot of oil. Or at least eat them as soon as they come out of the fryer.

Mix pancake mix, milk and egg in a bowl. Dip individual pickle slices into batter; place into hot oil (about 360 degrees). Cook in batches for three minutes. Serve with ranch dressing or your favorite dipping sauce.

Breading is a must for okra, fried chicken, fried tomatoes, fish, et al. Who can eat boiled okra? Only children, I bet!

I love okra any way you cook it. Especially pickled and sitting in a bloody mary.

I would choose starvation over boiled okra, although my parents and grandparents liked it that way and it does make vegetable taste a little better. Now, the pickles are good but they're too hard to eat. Too much chewing for my taste. I'm a lazy eater despite eating too regularly. I'm trying to lose the age 50 something weight you pick up once you stop being real active but fail to change appetite and diet. Speaking of things I hate to eat. I still hate salmon. My family cooked lots of it when I was a child and I refused to eat it along with most meats. I remained small when I wouldn't eat meats or food with meat in it.

What is a hot dog without the bun, a corn dog wihout the bread to encase, chicken-fried steak with the bread to tasten it up, french fries without some meal on them to make irregular, Jack wihout Jill and Adam without Eve? The answer - something that ain't right. Oh yeah, tasten is a word. I just made it one.